The Association of Tennis Players and Women's Tennis Association have slammed Wimbledon's "unilateral" ban of Russian and Belarusian players. The tournament is set to run from June 27 to July 10. 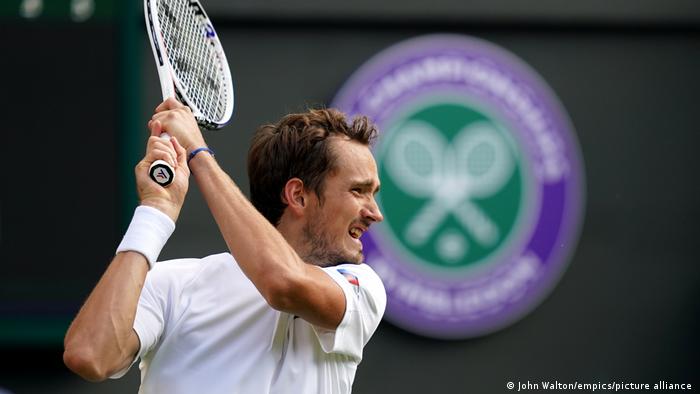 Wimbledon has banned Russian and Belarusian players from participating in the 2022 tournament in response to Russia's invasion of Ukraine.

The Association of Tennis Players (ATP) and Women's Tennis Association (WTA) on Wednesday called the move "unfair" and "very disappointing."

Belarus, which borders both Ukraine and Russia, has been an important staging ground for Moscow's invasion.

Wimbledon runs from June 27 to July 10 this year. Had the competition organizers followed the rules so far used at other major tennis events since the invasion, Russians and Belarusians would have been permitted to play, but only under a neutral flag.

What did Wimbledon say about the ban?

The organization that runs Wimbledon, the All England Lawn Tennis Club (AELTC), said it was acting to "limit Russia's global influence through the strongest means possible."

"In the circumstances of such unjustified and unprecedented military aggression, it would be unacceptable for the Russian regime to derive any benefits from the involvement of Russian or Belarusian players," an AELTC statement said.

"Given the profile of The Championships in the United Kingdom and around the world, it is our responsibility to play our part in the widespread efforts of Government, industry, sporting and creative institutions to limit Russia's global influence through the strongest means possible," the AELTC added.

The AELTC also banned Russian and Belarusian players from competing in other British grass-court tournaments, including events at Queen's Club and Eastbourne.

The statement said that the ban could be reconsidered if the situation changes "materially" by June. 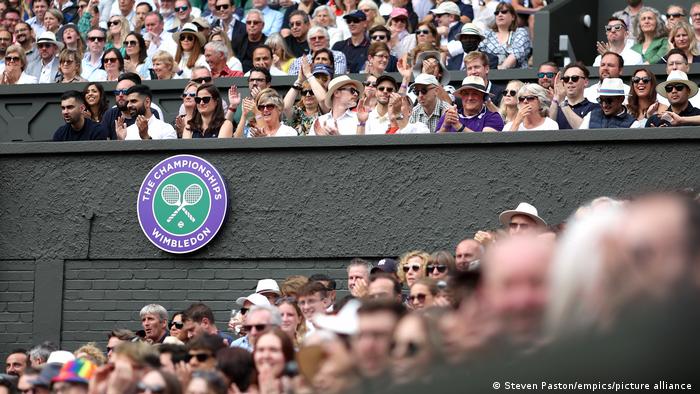 Players from Russia and Belarus have been able to compete on ATP and WTA tours since the war started, but were not allowed to use their national flags.

"We believe that today's unilateral decision by Wimbledon and the LTA to exclude players from Russia and Belarus from this year's British grass-court swing is unfair and has the potential to set a damaging precedent for the game," an ATP statement said.

"Discrimination based on nationality also constitutes a violation of our agreement with Wimbledon that states that player entry is based solely on ATP Rankings."

The WTA said that the ban was "neither fair nor justified," adding that it was "very disappointed in today's announcement."

"A fundamental principal of the WTA is that individual athletes may participate in professional tennis events based on merit and without any form of discrimination."

Ukrainian players Elina Svitolina, Marta Kostyuk and Sergiy Stakhovsky wrote a joint statement demanding that the WTA and ATP have Russian and Belarusian players answer a number of questions on their stance on the war and then ban them "if applicable."

"In times of crisis, silence means agreeing with what is happening. We noticed that some Russian and Belarusian players at some point vaguely mentioned the war, but never clearly stating that Russia and Belarus started it on the territory of Ukraine."

"If applicable, we demand to exclude and ban Russian and Belarusian athletes from competing in any international event, as Wimbledon [has] already done," the statement said.

18-time grand slam singles winner Martina Navratilova criticized the ban. The retired player was born in Czechoslovakia and has resided in the United States since 1975.

"Exclusion like this, through no fault of these players, is not the way to go... I think it's the wrong decision. Tennis is such a democratic sport. It is difficult when you see politics destroy it," Navratilova said. "And as much as I feel for the Ukrainian players and the Ukrainian people — it's just horrific what's going on — I think this is just going further than needed."

"[The players] are on the wrong side of politics... Hopefully this is only a one-off and won't escalate any further. This decision was made in a vacuum by the All England Club... I don't think they are seeing the big picture in a more global way."

Retired Ukrainian player Alexandr Dolgopolov expressed support for the move on Twitter."Any sport or business or really anything should take the same stance, until Russian people stand up and stop their bloody leader and all these war crimes and crimes against humanity. Wimbledon and UK showing leadership to stop all this madness."

Serbian player Novak Djokovic criticized the decision, arguing that the ban represented an interference of politics in sport.

"I cannot support the decision of Wimbledon, I think it is crazy," said the 20-time Grand Slam champion and men's world number one player.

"The players, the tennis players, the athletes have nothing to do with it. When politics interferes with sport, the result is not good."

Australian player John Millman accused Wimbledon of imposing the ban for "good optics" rather than to help Ukraine.

"I feel like Ukraine would be better served if Wimbledon donated their entire profit in support aid instead of banning Russian and Belarusian players," he said in a tweet. "I'm in total support of Ukraine and its people. I just feel like Wimbledon is doing this more for their own gain, for good optics rather than to actually help."

The world number one and three-time major winner made the announcement on social media. In January, Barty became the first Australian to win her home major since 1978, but says she is ready to leave tennis behind.