Athens Paralympics Closes on Tragic Note | News and current affairs from Germany and around the world | DW | 28.09.2004

Tragedy marked the closing of the Paralympics in Athens, when seven Greek schoolchildren were killed in a car accident Monday on their way to the competition. 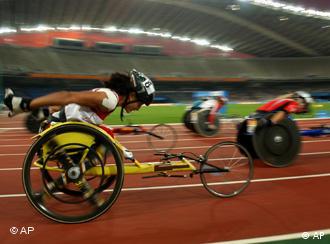 The closing ceremony of the Athens Paralympics was stripped of its festive elements after a school bus crashed, taking the lives of seven children who were en route to the games.

But even in the face of the tragic accident, competition spectators were rooting for one German runner to make Paralympic history.

Thirty people were injured in the accident, 26 of them pupils in their mid-teens, police told news agencies. Of 41 people on the bus, only four escaped unscathed.

"The Athens Olympics Organizing Committee has decided to cancel the closing ceremony of the 12th Athens Paralympics as initially planned and scheduled because of the tragic accident that cost the life of pupils," ATHOC said on Monday in a statement.

"The artistic and entertainment part of the ceremony will not take place," the statement added. Now, the closing ceremony on Tuesday will only consist of the athletes' entry into the main Olympic stadium, a closing speech by the president of the International Paralympic Committee (IPC), and the handover of the Paralympics flag to China, which will organize the next Paralympics.

A minute's silence was observed on Monday at all sports venues in remembrance of the victims.

The seven youths were killed when the bus carrying them to Athens crashed into a truck near the central town of Kamena Vourla, the Greek health ministry said on Monday. The stretch of road they were traveling on is one of the deadliest highways in Greece. Last year more than 80 people died and about 200 were injured in accidents in the same area. 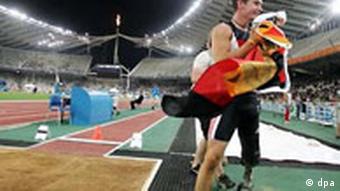 Mustapha El Aouzari from Morocco, during the final of 1500 meters

Meanwhile, German sports student and amputee Wojtek Czyz (photo) became one of the most successful athletes at the games when he earned his third gold medal on Monday evening. Having already taken the gold in the 100-meter and 200-meter sprints for amputees above the knee, the 24-year-old succeeded in beating his own long jump record by 38 centimeters, to 6.23 meters.

Czyz was set to carry the German flag at the abbreviated final ceremony on Tuesday, where his team will show off its 19 gold medals, 27 silver and 31 bronze, which left Germany 8th in the overall rank of medal-winners.

The closing festivities were initially planned to last two hours, including a 40-minute grand finale with music and fireworks, a source at the show's French production company, ECA2, told news agencies. The curtailed version of the ceremony will take only one hour, including the 25-minute entry march of the Paralympic athletes. 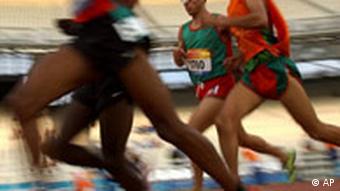 Nearly 4,000 disabled athletes are competed in the September 17-28 Paralympics, which features 19 sports, including athletics, swimming and wheelchair basketball. Some of the athletes were themselves handicapped as a result of road accidents.

Meanwhile, four more athletes tested positive Sunday for banned substances and were disqualified from the games on Sunday. Organizers said they target high-risk sports and countries for testing.

Three power lifters -- the Paralympics equivalent to weight lifting -- from Estonia, Syria and Iran were disqualified, along with a cyclist from Slovakia.

Ali Hosseini of Iran, Cheikh Younes of Syria, and Aleksandr Koroljov of Estonia lost medals or were banned from competition for a certain amount of time, or both, after having tested positive for banned substances.

Tandem cyclist Juraj Petrovic of Slovakia lost a silver medal but no further sanctions were imposed. His partner, who did not test positive, was also deprived of a medal.

A total of seven athletes have tested positive for banned substances since the beginning of the Paralympics in Athens.

Systematic Paralympic anti-doping controls began in the 1992 Barcelona Games. Four athletes, all medalists, tested positive. Out of 300 doping tests conducted at the Atlanta Paralympics in 1996, none were positive.

The German team has already clinched 47 medals at the ongoing 12th Paralympic Games in Athens which has drawn disabled athletes from 140 different countries and now also witnessed a doping scandal. (September 23, 2004)