In the midst of the coronavirus pandemic, three astronauts have returned to Earth from the ISS. Their replacements spent a month in quarantine, unable to see their families, before traveling to the space station. 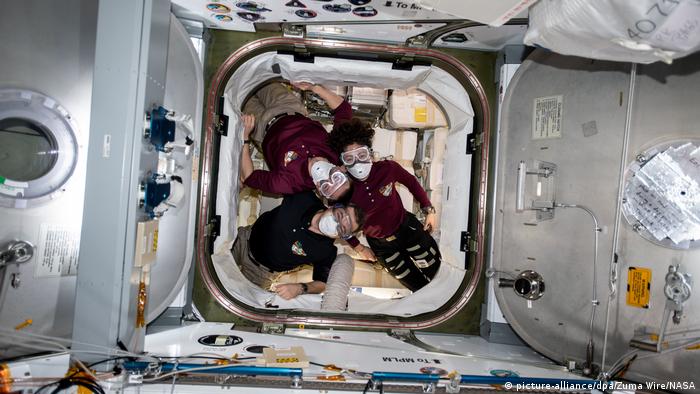 Three astronauts landed back on Earth from the International Space Station (ISS) on Friday.

A Soyuz MS-15 spacecraft undocked from the ISS at about 10 p.m. UTC Thursday, with Russian cosmonaut Oleg Skripochka and NASA astronauts Andrew Morgan and Jessica Meir on board.

Meir said it would be hard not to embrace family and friends due to a new culture of coronavirus-enforced social distancing on Earth. "I think I will feel more isolated on Earth than here," she said.

NASA said in a statement that after post-landing medical checks, the crew would return to the US city of Houston and Star City in Russia.

They had spent more than 200 days in space and returned to Earth exactly 50 years after the Apollo 13 crew splashed down in the Pacific.

Morgan spent 272 days on board, during which he conducted seven space walks. He spent four of those walks improving and extending the life of the Alpha Magnetic Spectrometer, which searches for evidence of dark matter in the universe.

Meir and Skripochka both spent 205 days in space, during which time Meir carried out the first three all-women spacewalks with Christina Koch, who returned in February.

They passed control of the space station to the newly-arrived crew — cosmonauts Anatoly Ivanishin and Ivan Vagner from Russia's Roscosmos space agency, along with American astronaut Christopher Cassidy — before departure.

The new trio had to spend about a month in isolation due to the coronavirus pandemic, and were unable to say goodbye to their families in person.

The ISS, which orbits Earth some 400 kilometers above it, has a mostly US and Russian crew. Its laboratory conducts scientific experiments that cannot be carried out on Earth's surface.

Solar Orbiter blasts off in mission to the sun

A joint US-European team successfully launched a space probe from the Kennedy Space Center. Scientists hope the probe will take the first photos of the sun's polar regions on a journey that could last up to nine years. (10.02.2020)