What do you live for? A "reminder guerrilla" project launched in Germany uses plain old sticky notes to tap into the collective consciousness and persuade people to ponder life's more difficult questions.

The streets are wet, and the temperature is just above zero degrees Celsius in downtown Cologne. Fifteen-year-old Melis Omalar strolls stealthily along the sidewalk with her hands in her coat pockets. Tonight she's on a guerilla mission. Her weapon: a pile of pale yellow stickers with questions typed on them in bold print.

She hesitates at the entrance to an apartment building, takes one of the sticky squares out her pocket, and slaps it on the door.

"'What do you live for?' My favorite question," she says. "I don't think there's one big reason you live for, just little things - like coffee or books."

Some of the other weighty questions the school student is armed with include "Is what you're doing good?", "Can you please save the world?" and "When does your heart sing?" 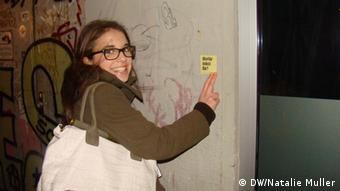 It's the little things that are important to Melis Omalar

"I think these are just questions everybody can ask themselves," Omalar says. She is part of the quiet and peaceful army behind a non-profit social project that encourages ordinary people to reflect on their lives and actions.

The stickers are ordered online by would-be guerillas, then posted in public spaces. Besides a bit of fun that occasionally draws inquisitive glances from passers-by, Omalar says there's a deeper motive behind tonight's expedition.

"I want to make people conscious," she says. "So many things are happening that they just forget about the important things, about the little things; they are just so stressed about other things, like Facebook, and what did she say or what did he do."

The Reminder Guerilla project was launched by psychologist Susan Barth in Berlin in 2012. She had been using similar questions in her sessions with patients and decided to experiment by sticking them up in the street.

"I often find that most people know what they want and know which way they should go, but they simply forget it," she explains. "So I thought, how can we remind them?" She hopes the sticky notes will help people to never lose sight of their goals and of what really makes them happy. 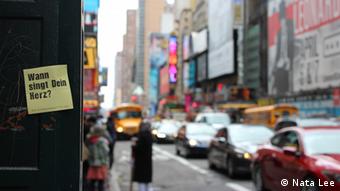 The German sticky notes have even cropped up in New York

"To have questions in your mind, even if you don't have answers, is a very healthy way to stay in contact with your own path as a human being," she adds.

So far around 35,000 stickers have been ordered from around Germany, as well as from Switzerland and Spain. The little squares have also been posted further afield - from London and Paris, to Hong Kong and New York. The questions are only printed in German, but Barth says she's had several requests for English translations. "This is the next step in the project, so we can go international!"

Positive outlook from behind bars

According to Barth, it's not just individual activists who've shown an interest. Orders have also come from universities, schools, NGOs, a police station and a prison.

"Once a policeman called, and I was a bit worried that I'd done something wrong," she remembers. "Then he just said he needs the stickers for his colleagues because he thinks policemen should ask themselves more often, 'Is what you're doing good?'" 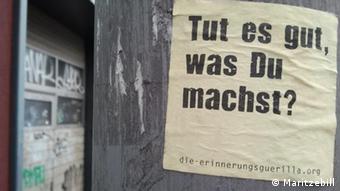 'Is what you're doing good?'

Psychologist Claudia Krakau also uses the stickers at her work, during therapy with female prisoners at Cologne's Correction Facility. The question "What makes your heart sing?" can trigger positive thoughts for someone struggling to cope with their situation in prison, she explains. "If there's a possibility for them to remember 'I like painting,' or 'I like to write letters,' then that's a talking point to build on."

Many women put the stickers in their cells to serve as daily reminders of their personal goals. However, not all the questions are suitable for every prisoner. "What do you live for?" can be very delicate, says Krakau, because many of the inmates they work with are at risk of suicide. On the other hand, "Is what you're doing good?" can help those battling drug addiction "to think about whether they really want to consume the drug now, or whether they want to continue trying to live in abstinence," she adds.

Krakau stresses her work in the prison is vastly different from that of guerillas like Omalar who order the stickers to put up in the street. For starters, she chooses the questions carefully, depending on the individual she's working with. Generally, guerilla actions are targeted at the broader public, and the guerillas are never present to witness the impact of their handiwork.

Escaping from the daily grind

The Reminder Guerilla project is just one of many similar grassroots movements - think guerilla knitting and gardening - that have seeped into cityscapes in recent years. New York-based artist Keri Smith says there are a few reasons why such guerilla groups have sprung up.

"People are looking for ways to reanimate everyday life," she says. "We all get stuck in routine, and we're all so tuned in to our devices and screens, so it feels really good to have something that helps you to actually tune into the landscape around you and have that effect of waking you up." 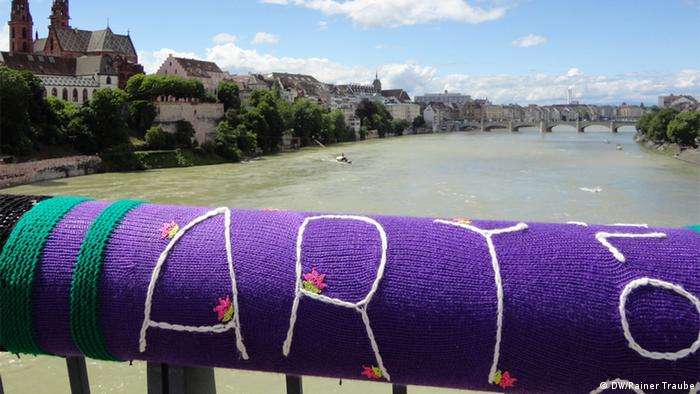 Guerilla knitters brighten up a bridge in Basel

Guerilla actions have also morphed from rebellion against the system, to something that can be more fun, says Smith, who is also the author of "The Guerilla Artist." "There's a new form that's evolved in the past few years, where someone creates a piece of guerilla work to help people, like a helpful guerilla."

Perhaps Germany's Reminder Guerilla project fits into this category. It's what Melis Omalar in Cologne would like to think. She's ready to head home, and is hoping her night's work will encourage some reflection, even if she won't be around to see who passes by, or whether they take notice.

"I just like to make people see these and for one little moment think about these things - and just remember," says Omalar.

German police may soon be armed with a smartphone app to help crack down on far-right music. Dubbed 'Nazi Shazam,' the program has been praised as a handy tool to combat extremism, but some experts are skeptical. (06.12.2013)

What does Europe's youth look like? What do Europe's young people want? What are they afraid of? In Berlin, a photo exhibition shows 100 portraits of young people from seven countries. (22.08.2013)

Once a wasteland in the shadow of the Berlin Wall, a plot of land in the middle of Berlin has been revitalized and converted into an urban mobile farm called “Prinzessinnengarten.” Check it out in our audio slide show. (11.07.2012)