The price of oil has gone from bad to worse in the new year, plumbing lows not seen in over a decade. The commodity's performance has raised interesting questions about the effect it has on global stock markets. 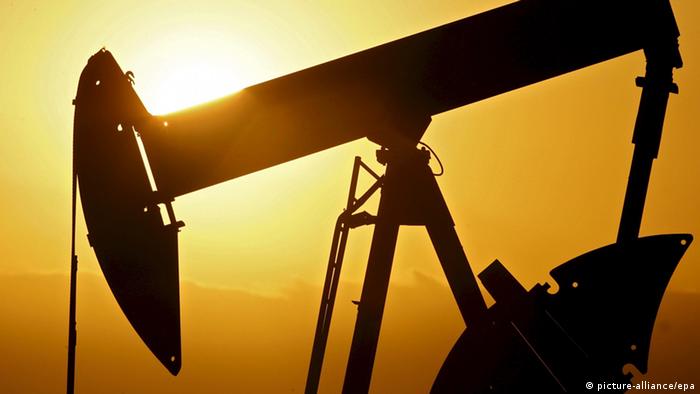 On Tuesday, the price of a barrel of oil dipped below the $30 mark. And as it rose and fell, so did the markets.

West Texas Intermediate, the benchmark for US oil, was going for as low as $29.97 (27.6 euros) a barrel, the cheapest it's been since December 2003. Brent crude, the global oil benchmark, made modest gains before falling to $30.40 a barrel, a level not seen since April 2004.

The reason for this, as with any commodity, is a simple matter of supply and demand. But falling energy prices, while unnerving some investors, have also raised interesting questions about the effect they have on the performance of stock markets around the world.

Generally, there is little positive correlation between the two. One goes up, the other goes down or stays flat. Rarely do they move in tandem.

As oil prices have moved lower recently, they have seemed to drag equity markets down with them. In Europe, where the price of oil steadied at around $32 per barrel at one point before retreating, the FTSEurofirst 300 index also closed below an inter-day high.

Oil prices are lower than ever - Who wins, and who loses?

The winners and losers of low oil prices (2015)

In the United States, struggling energy stocks have also weighed on markets. On the S&P 500, they were the day's biggest losers, down 1.6 percent, their movement following that of the declining oil prices.

Razaqzada said one reason for the correlation could be the degree to which the price of oil has plunged in the last year.

"The fact that oil prices have fallen this sharply has been a major drag on the commodities sector," he said.

All eyes on China

In the long term, the low price of oil has been all about Saudi Arabia and other OPEC members protecting their market share. They want to edge out shale gas producers in the United States, and they have been trying to achieve that goal by pumping oil at a very fast clip.

In the short term, however, all eyes are on China, the world's most ravenous energy consumer, where an economic slowdown is currently crimping demand for oil products.

"It has spooked the oil market and probably other commodities as well, because one of the elements of rebalancing the oil market is a growth in demand from China," said Spencer Welch, the director of the oil markets team at IHS.

Welch added that he expects Chinese demand for oil to increase by 350,000 barrels a day in 2016 over last year - roughly a third of all global demand growth. He also said IHS was betting on the oil market coming back into balance by the third quarter of this year and the price per barrel slowly creeping up to around $50 by the end of 2016.

Meanwhile, the low price of oil - it has shed about 70 percent of its value over the last 18 months - is having wide-reaching consequences for countries and corporations alike.

On Tuesday, Bahrain and Oman slashed state subsidies for gasoline, causing prices at the pump to rise by up to 60 percent in Bahrain. Come Friday, when Oman plans to follow suit, gas prices there are expected to jump by 33 percent.

Russia announced a plan to reduce government departmental spending by 10 percent in order to fill the hole in state coffers left over by dwindling oil and gas tax revenues.

The British oil giant BP said it was eliminating some 4,000 jobs in its exploration and production sectors over the next two years in order to "ensure our business remains competitive and robust," according to a statement from Mark Thomas, the regional president for BP North Sea.