Aruba frees Venezuelan diplomat wanted in US on drugs charges

A Venezuelan former intelligence chief who had been arrested in Aruba on US drugs charges has been freed. Hugo Carvajal was declared 'persona non grata' by the Dutch foreign minister. 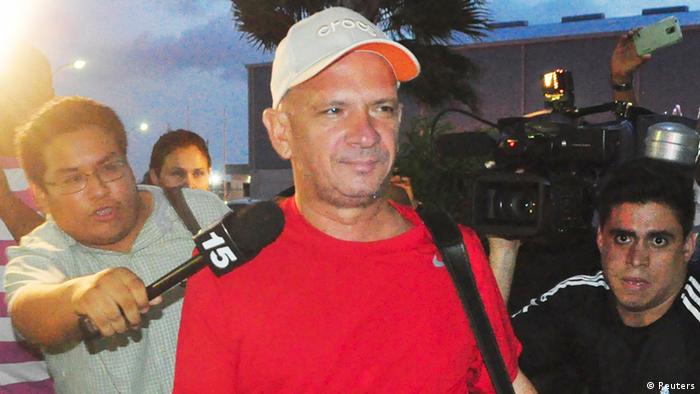 Hugo Carvajal (pictured above) was freed late Sunday after being arrested last week in Aruba, which is part of the Kingdom of the Netherlands, as he arrived to serve as Venezuela's consul general on the Caribbean island. He was detained at the request of US prosecutors, who want to try him over alleged drug crimes and helping Colombia's Marxist FARC guerrillas.

At the time of his arrest, Carvajal's diplomatic status had led to confusion as to whether he was entitled to immunity from prosecution. Aruban authorities had argued that did not have immunity because he had yet to be accredited by the Netherlands.

That was cleared up at a press conference in Oranjestad, Aruba's capital, late on Sunday, when it was announced that Carvajal did indeed have immunity. However, it was also announced that the Dutch foreign minister, Frans Timmermans, had declared the retired general 'persona non grata' - a term used by governments to remove diplomats.

Dowers said Carvajal was arrested because he had arrived on a diplomatic passport but had not yet been accredited by the Dutch authorities to serve as a diplomat on the island. Officials decided to act on the US detention request because of an international treaty between Washington and the Netherlands.

Carvajal was later flown on a private plane back to the Venezuelan capital, Caracas, where he was met by First Lady Cilia Flores, the wife of President Nicolas Maduro.

"It is a very brave decision by Holland to acknowledge diplomatic immunity was violated, and for international law to be restored. It takes clarity, good will and bravery," Maduro said upon learning of Carvajal's freedom. Venezuela had been deeply critical of the arrest, labeling it "illegal and arbitrary."

US officials were "very disappointed" with the decision to free Carvajal, Aruban Justice Minister Dowers said.

In 2008, the US Treasury Department accused Carvajal of arming the FARC rebels, protecting drug shipments that the group sent through Venezuela, giving them official government identity papers and allowing them to maintain a stronghold along the Venezuelan-Colombian border.