Artist Angered by Scrapping of Communist Solidarity Snog | Germany | News and in-depth reporting from Berlin and beyond | DW | 28.03.2009

Another Berlin landmark bites the dust: A famous example of Soviet-era kitsch that once adorned the capital citiy's popular East Side Gallery has been 'disappeared.' Much to the indignation of the artist. 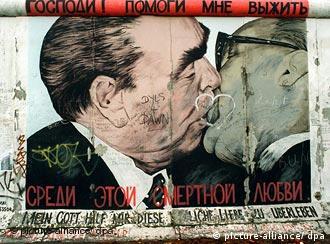 When Moscow-based artist Dimitri Vrubel visited Berlin this week to attend the opening of a new exhibition at the Foreign Ministry called "Born in the USSR," he got quite a shock when he took a stroll along the East Side Gallery, often dubbed "the world's largest open-air museum."

It was here, in 1990, that he painted an image on the 1316-meter stretch of the remaining Berlin Wall that fast became iconic.

But the clinch between comrades Erich Honecker and Leonid Brezhnev and the East Side Gallery's erstwhile star attraction has now been reduced to a stretch of bare concrete.

For years, tourists have been flocking here to see East Germany's long-time leader smooching the General Secretary of the Communist Party of the Soviet Union.

19 years ago, Vrubel was one of 117 artists from 21 countries commissioned to revamp the stretch of wall running along the Muehlenstrasse in the former East Berlin.

But to Vrubel's horror, all that is left of the comradely kiss is the Russian title, which roughly translates as "God help me survive this fatal love."

The most-photographed section of the remaining Berlin Wall, it seems, has fallen victim to redevelopment -- like so much in the German capital.

Scrubbing up for the anniversary 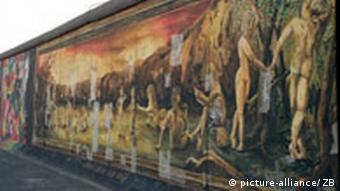 Remnants of the Berlin Wall are a popular tourist attraction

Admittedly, the artist knew a restoration was due ahead of the 20th anniversary celebrations of the fall of the Berlin Wall. But he assumed that just meant a bit of retouching here and there.

He was wrong. "It was a misunderstanding," Kani Alavi, head of the East Side Gallery's Artists' Association, told the mass circulation tabloid Bild. "We told him that the substance of the actual wall needed restoring, and that involved stripping it of all the murals."

"This is an abuse of the artists," says Dimitri Vrubel. Now, he's expected to recreate his original image -- but he's putting his foot down. "That would be a brand new piece of work, not a restoration," he insists.

The East Side Gallery's Artists' Association is prepared to pay Vrubel compensation of 3000 euros (almost $4000), but he feels he's being fobbed off.

After all, the Socialist smooch has been used as a motif on mugs, postcards and other memorabilia. "I've never seen a cent," he told Bild.

For years, tourists have wandered around Berlin looking -- sometimes in vain -- for the famous landmark that marked the divided city. But city officials are aiming to change that. (27.06.2006)