Around the world in a solar car

Australia, US, Europe - they've already traveled a long way. A team of students is currently touring the world in a solar-powered car. It's an adventure, though the car could be more comfortable. 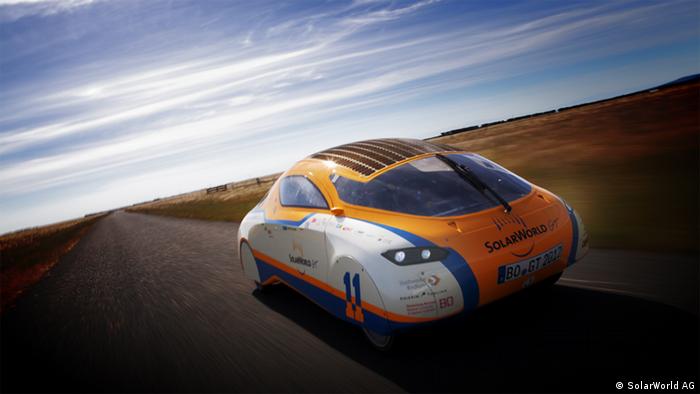 The sun might be burning in the sky, but the promised test run in the solar-powered car will have to wait. The batteries are empty, explains Matthias Drossel, student of electro-technology at Bochum University of Applied Sciences in western Germany. The weather just wasn't quite good enough in the past few days, he says, especially on the journey through Belgium.

Now Drossel and the rest of the ten-strong team have to use the sunny day to recharge. They have unscrewed the solar panels from the car and set them up facing the sun at the optimal angle to soak up as much energy as possible. It will take four hours for the batteries to fully recharge, says Drossel after a glance at his laptop. So instead of a test drive, we'll have to make do with a test sit in the SolarWorld GT. 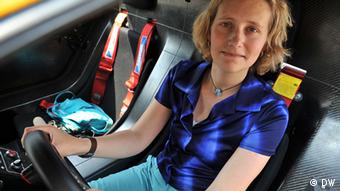 The SolarWorld GT is a little cramped on the inside

As the name suggests, Bochum University built the solar-powered car with the support of the company Solarworld. Now it has sent a team of students to circumnavigate the planet, running only on the energy of the sun. The journey is to take one year, touring Australia, the US, Europe, and Asia before returning to Australia.

The main rule is that they're not allowed to draw energy from any conventional power grid, explains engineering student Yago Elbrecht. "We want to show that it's possible to drive round the world on solar power," he said. "And if the sun doesn't shine, then we have to wait around in the same place for two or three days."

In the midday heat, there is enough solar power to drive at 50 kph (31mph), but in the mornings and the evenings, the engine has to draw energy from reserve batteries in the trunk, as it does when the driver decides to accelerate. That means the students generally putter around the world at an average 50 kph. "The fastest we managed was around 110 kph," says Elbrecht. "That was in New Zealand, I think. We were going downhill."

Two conventional gasoline-powered cars are accompanying the Solarworld team, carrying the team and its luggage. The students alternate driving the car, and make running repairs. "I took two semesters' holiday so I could be on the whole journey," says Elbrecht, grinning. "I thought to myself, 'You'll never get the chance to drive around the world ever again, and then to do it in a solar car - it's just amazing!" 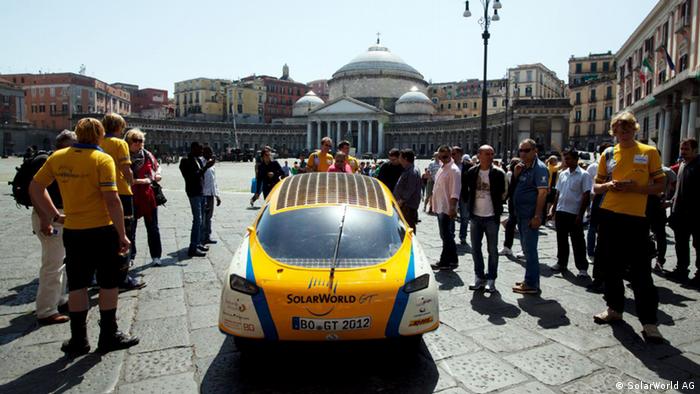 The team are on the European leg of their circumnavigation - here in Naples, Italy

Memories of the fairground

The first time you sit behind the wheel of the solar-powered car, it reminds you of the bumper cars you used to race round in at the fairground. The steering wheel is rather small, and the only two seats are fairly uncomfortable. And there is not much room, especially for someone as tall as Elbrecht. "But it's fine," he says. "I just have to sit a little cramped, that's all." After all, he points out, the rest of the team is smaller than he is.

It just takes a few minutes to get pretty warm in a car on a sunny day, and the SolarWorld is no different. Air-conditioning could not be included, of course – too heavy and too energy intensive. Instead, two slits have been cut into the front of the car to allow some air in and cool the driver a little. "It didn't do much good in Australia," says Elbrecht. "It was just too hot."

By the same token, there is no heating - which was sorely missed in the mountains of Arizona - no power steering, and no assisted braking. Like in a sports car, you sit very deep in the solar car and very close to the road surface. On top of that, the car lacks the suspension generally built into a conventional car: "You feel every bump in the road, every pothole," says Elbrecht. "It does rattle a lot." 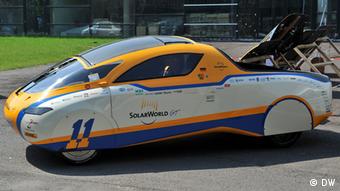 The students are out to prove that it can be done

After four hours, the solar car's batteries are full again. Elbrecht, Drossel and the others have fitted the solar panels back onto the vehicle. Now the test drive can begin. The driver puts a helmet on, which has a radio inside that keeps him in constant contact with the rest of the team in the accompanying cars. "I'm starting the engine now!" he calls into the microphone.

He turns the key in the ignition, and the electric motor begins to hum quietly - a very different noise from that of a standard combustion engine. Only when the driver presses the accelerator does the engine start to buzz more loudly. It sounds rather staccato and unhealthy, but the driver seems to be happy, so that must be how it's supposed to sound. He says that the engine goes quiet again when the car reaches 15 kph.

Sadly, the test drive ends at the next corner. From there, it will drive on towards Duisburg, and then through Asia and back to Australia.

Solar power for clinics in Kyrgyzstan

A new German-built telescope called Gregor will help researchers observe the sun better than before, and will deliver images of the solar core. It's just been unveiled on Tenerife. (22.05.2012)

China has voiced its anger over a preliminary decision by the US administration to levy heavy duties on solar panels. Washington believes that China's current price policies undermine fair competition. (18.05.2012)