Arms manufacturer investigates how Gadhafi got German rifles | Germany| News and in-depth reporting from Berlin and beyond | DW | 04.09.2011

Libyan rebels captured a stockpile of rifles, made by Heckler & Koch, in Gadhafi's compound last month. Both the company and the German government maintain that they never sold such rifles to the Gadhafi regime. 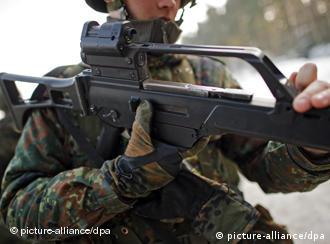 The G36 is used by many militaries worldwide

German arms manufacturer Heckler & Koch plans to send an investigative team to Libya in order to find out how a cache of its assault rifles ended up in the ends of Libyan dictator Moammar Gadhafi.

"We are in close contact with the authorities and plan to send a diverse team of experts to Tripoli in order to investigate the matter with the relevant authorities on the ground," managing director Martin Lemperle told the newspaper Bild am Sonntag.

Libyan rebels seized a stockpile of G36 KV model rifles after storming Gadhafi's Bab al-Aziziya compound in Tripoli last month. The G36 is the standard issue weapon for the German armed forces and is also used by many foreign militaries.

Markings on the G36 KV rifles indicate that they were manufactured in 2003. Although every weapon made by Heckler & Koch can be traced by its serial number, the numbers on the rifles found in Gadhafi's compound had been filed off and replaced with different ones. 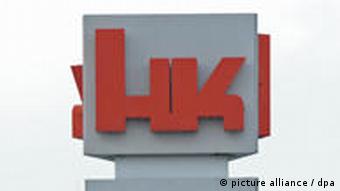 Heckler & Koch says it did not sell the rifles to Gadhafi

Lemperle said Heckler & Koch has never exported weapons to the Gadhafi regime and that other parties must have sold the rifles to Libya. The German government, which must approve the export of weapons like the G36, has said that it never authorized a sale of such rifles to Gadhafi.

Saudi Arabia has also been licensed by Berlin to manufacture the G36 assault rifle. Exports of the G36 by Riyadh, however, also must be approved by the German government.

Chancellor Angela Merkel's center-right coalition government came under fire in July for the reported sale of 200 Leopard tanks to Saudi Arabia, which the opposition feared could be used to quell anti-government protests. The German government has not yet confirmed whether that sale was approved or carried out.

A former German cabinet minister has joined the opposition Greens in criticizing Berlin for a suspected tanks deal with Saudi Arabia. The Greens have initiated legal proceedings to force Berlin to confirm the sale. (01.08.2011)

The German government has defended its controversial decision to deliver tanks to the Saudi regime, as the deal continues to come under harsh criticism from both opposition and coalition parties. (10.07.2011)

Out of principle, the German goverment refused to take part in military action against Libyan dictator Gadhafi. But it appears selling arms to both sides of international conflicts has never been a problem for Berlin. (21.04.2011)