An armed squad has killed eleven people in Venezuela, including a Colombian national and three minors, according to the Attorney General's office. The impoverished country is descending into violence. 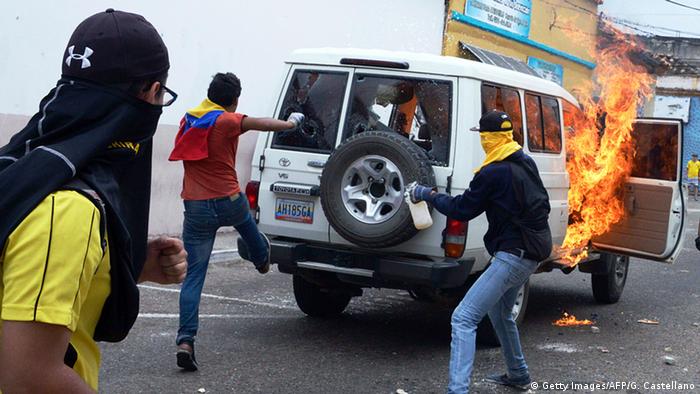 The Attorney General's office said the victims were in their homes in Andrés Bello in the northwestern state of Trujillo, when several armed men forced them to move into courtyards where they were shot dead.

The victims included adult males aged 18 to 76 and three teenagers aged 15, 16 and 17. The Colombian national was identified as 76-year-old Alberto Diaz Patino. The Spanish-language news agency EFE reported that all of the victims were male.

According to a statement, the suspects fled the scene in cars and motorcycles. Two prosecutors have been assigned to the case.

Venezuela is one of the most violent countries in the world that is not at war, with 58 homicides per 100,000 residents in 2015 according to prosecutors. In 2015 alone, there were 17,778 cases of homicide reported in the South-American country. The nongovernmental Venezuelan Violence Observatory says the murder rate is about 50 percent higher than the officially reported numbers.

In another example of such mass killings, an armed group killed 17 miners in the town of Tumeremo in March in the country's far southeast, near the border with Brazil. Their bodies were found in a pit.

On Sunday, German airline Lufthansa announced it was suspending its three weekly fights to the country's capital. The decision comes amid growing concern about Venezuela's worsening economic situation.

Venezuelan government officials have held secret talks with opposition leaders in the Dominican Republic. The meetings aim to pave the way for a resolution to a political standoff in the South American country. (28.05.2016)

Venezuela's opposition has presented more than a million signatures to election authorities calling for a referendum to remove the country's president. Economic woes have eaten into the left-wing president's popularity. (02.05.2016)

Venezuelans have been asked to stop blow-drying their hair and ironing clothes, among other measures, to save electricity. The country is suffering from a power crisis, but there is disagreement over what caused it. (26.04.2016)