′Armageddon′ Brexit: ′No deal′ scenario could hit fuel and food | Europe| News and current affairs from around the continent | DW | 03.06.2018

'Armageddon' Brexit: 'No deal' scenario could hit fuel and food

UK officials have warned that leaving the EU with no deal could immediately cripple trade, a newspaper report says. In one scenario, there could be food and fuel shortages within two weeks. And it could be even worse. 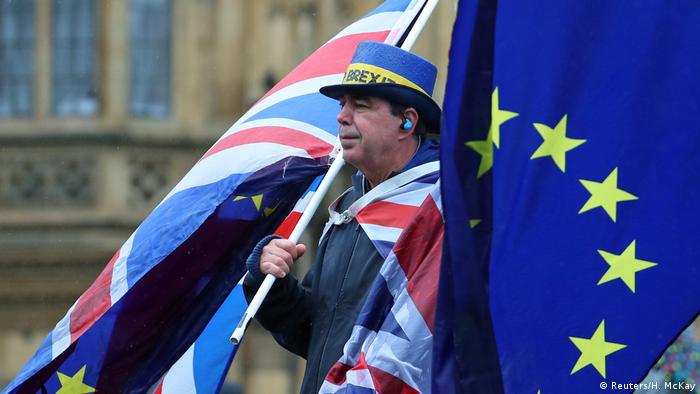 British civil servants have warned that the country's failure to reach a trade agreement with the European Union before leaving the block in 10 months could have catastrophic consequences for the island nation, the UK's Sunday Times newspaper reported.

Government officials modeled three potential scenarios should Britain leave the EU, or Brexit, with "no deal." In a best-case scenario the consequences would be "mild." Beyond that the fallout could be "severe" or, in a worst-case scenario, lead to "Armageddon."

The report said that even under a "severe" result, the English port of Dover would "collapse on day one." It added that supermarket shelves would be bereft of food and hospitals would run out of medicines and other supplies within two weeks.

Britain is trying to reach an agreement with Brussels on future trade relations with the EU before its scheduled departure from the bloc on March 29, 2019. But officials are also drawing up plans in the event that Britain walks away without a trade deal.

Britain's Department of Exiting the European Union said it was preparing plans for a no-deal scenario, but said it was confident that "none of this would come to pass."

He insisted the country would bring a solid set of proposals on Brexit policy to its next meeting with EU leaders at the end of the month.

A future customs agreement has been the biggest obstacle during ongoing Brexit negotiations as the clock winds down towards Britain's scheduled departure date — now less than 10 months away.

On Saturday, the Irish government said Prime Minister Theresa May had two weeks to put forward proposals for a frictionless border between the Republic and Northern Ireland. However, her Cabinet is divided and EU officials have so far been dismissive of draft options under consideration in London.

Read more: May begs for the UK's trust

Opposition to Brexit is growing in the UK

Opposition to Brexit is growing in the UK

Javid said Cabinet discussions aimed at finding consensus were making good progress ahead of the summit scheduled for June 28-29.

"I am absolutely confident as we get to the June council meeting that the prime minister will have a good set of proposals, and our colleagues in Europe will respond positively to them," Javid told the BBC.

Since British voters shocked the world with their June 2016 vote to leave the EU, May has maintained that leaving without any deal would be preferable to taking a poor deal.

The government still aims to get a deal, but is preparing for all scenarios, including a no deal outcome.