Argentina's new pro-business president Mauricio Macri has announced tax cuts for a number of key export goods in hopes to kickstart Latin America's third largest economy. A devaluation of the peso is also in the cards. 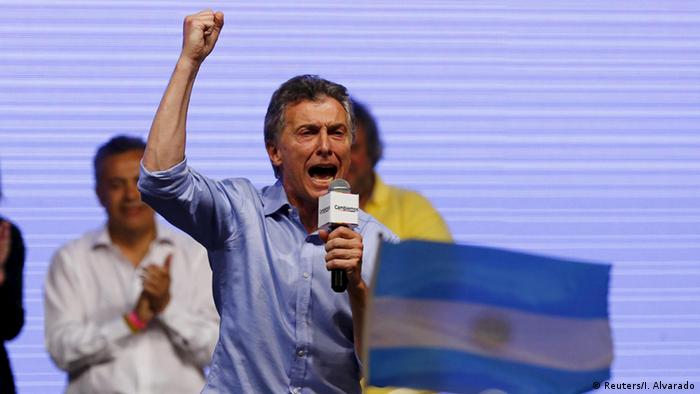 Speaking to farmers in the town of Pergamino on Thursday, Mauricio Macri announced the end of taxes on wheat, corn and sorghum exports and a tax cut on soybean exports, from 35 percent to 30. Then he met with business leaders saying that a five-percent tax on industrial goods for export would also be scrapped.

"Let's not think of things in terms of 'farms versus industry,'" he said, and added: "It's farms and industry, farms and the country. Without farms, the country can't survive."

With the tax cuts, Macri fulfilled key campaign pledges that made him win presidential elections this month, ending more than a decade of left-wing rule over Latin America's third largest economy.

The taxes had been introduced in 2008 under the Peronist government of former president Cristina Kirchner. Protests over the steep rates paralyzed the agriculture sector that year and turned into a crisis for her government. Argentine farmers have been hoarding their crops in hopes of more favorable conditions.

Macri urgently needs farmers to start exporting their hoarded crops, which are a key source of hard currency for the central bank. Agricultural exports are expected to total $25 billion (22.6 billion euros) this year, a third of Argentina's total exports. Macri encouraged farmers to grow even more and ramp up production of processed products.

"We can double Argentina's food production," he said, calling for "more corn, more beef, everything we're capable of."

Argentina's economy is suffering from high inflation and a chronic budget deficit. In addition, it faces warnings of a recession next year.

On Thursday, there was speculation that Argentina's central bank is preparing moves to devaluate the country's currency, the peso, under efforts to help Macri's export drive.

According to media reports, the bank was willing to let the peso slip from currently about 10 peso to the US dollar to a rate of 15 to one. Exporters in both the industrial and agricultural sectors are pressing for a devaluation that would make their goods cheaper in global markets.

Macri to take Argentina in a new, neoliberal direction

Mauricio Macri is sending out clear signals even before his official inauguration. He's installed a cabinet of bankers and managers and plans to return the country to a free market economy after 12 years of isolation. (06.12.2015)

Argentina's voters have a choice between contrary visions of their country in a historic election runoff that pits 12 years of a robust welfare state against neoliberalism. Irene Caselli reports from Buenos Aires. (21.11.2015)

The UN General Assembly has passed a resolution supporting a nation's right to restructure its debt without interference from foreign courts. The move strengthens Argentina's hand in a debt dispute with US hedge funds. (11.09.2015)