Former Argentine strongman, Jorge Rafael Videla, died Friday in a Buenos Aires prison at the age of 87. During his rule, between 1975 and 1981, an estimated 30,000 people disappeared or were killed. 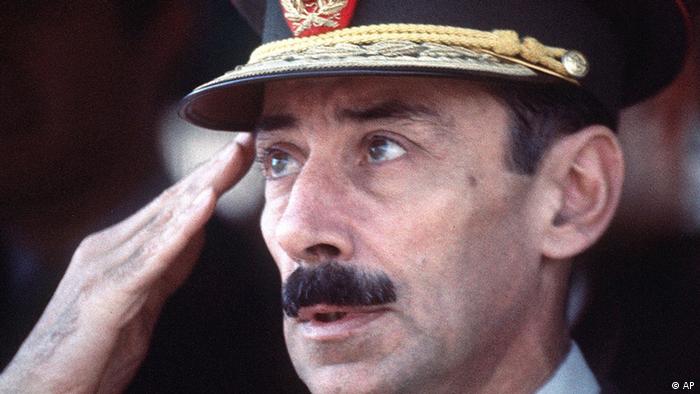 Videla's regime was best known for its ruthless purge of opposition figures, a dirty, domestic war aimed at leftists, trade unionists, university professors, theologians and anyone else who dared to question his authority.

Videla was said to have died peacefully in his sleep Friday morning in his jail cell in the Argentine capital, where he was serving a life sentence for crimes against humanity.

His opponents were much less fortunate. Many were tortured, maimed, summarily executed, or tossed, bound and gagged, from airplanes into the chilly waters of the South Atlantic. 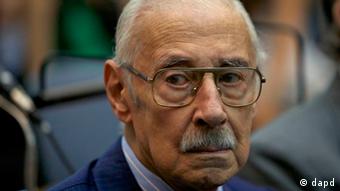 Videla, at a trial in 2011, expressed no remorse

Up to the very end, Videla never expressed any remorse for the thousands of people sent to their deaths. Videla left the fate of prisoners to a specially appointed commission to decide: release, prison, or 'disposición final' – elimination and disposal.

"That was a military term for the discharge of useless material," Videla explained in an interview published in 2012.

His choice of words reflected his lack of regret. What he and his generals did had to be done, he said again and again over the years.

Videla insisted that his 1976 coup was meant to discipline an "anarchic society," to get away from the "populist demagoguery" and establish a liberal market economy. 'Proceso de reorganización nacional' is what he called it – a process of national reorganization. Some 30,000 people fell victim to this process.

Many Argentines welcomed the military intervention in 1976. For many years before, extremist left-wing guerillas – Montoneros – had terrorized the country. After Videla's coup, many hoped for calm and peace – until the dictator banned political parties and shut down parliament. By then, it was too late to turn back. The 'dirty war' of the dictatorship had already begun against its own people. 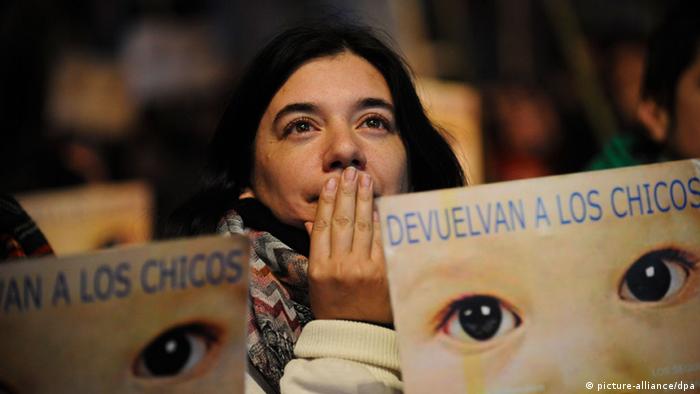 Argentineans are still trying to uncover the fate of the missing

When the dictatorship finally ended in 1981, Videla was sentenced to life in prison. In 1990, then-president Carlos Menem pardoned Videla, but the country's Supreme Court annulled the amnesty in 2010.

Since then, there have been numerous trials against the old man for crimes against humanity, organized human trafficking of children, murder and kidnapping. The cases ended in long prison terms – the last one, 50 years for child-snatching. Videla never appeared visibly moved by the sentences.

He always saw himself as a political prisoner. In his unshakeable belief in his own mission there was no room for deeper insight, or desire for forgiveness. "We had to eliminate a large number of people," he would repeatedly say. 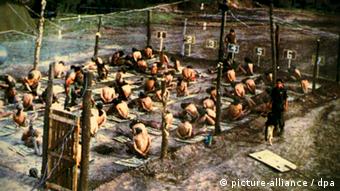 Today, surviving victims and the families and friends of those who died are still painstakingly fighting for justice and some sort of satisfaction for their suffering under Videla.

"He was a bad person. He never came to apologize for his actions," said Estela de Carlotto, president of the human rights group Grandmothers of the Plaza de Mayo, which searches for those victims still missing and unaccounted for.

Thanks to their efforts and those of former president Nestor Kirchner (2003-2007), the history of Argentina's last dictatorship is now being confronted, pieced together and evaluated. Videla himself contributed nothing.

Former Argentine military dictator Jorge Videla has died in prison from natural causes. Head of a military junta which organized a coup in 1976, he was serving a life sentence for crimes against humanity. (17.05.2013)

Human rights activists are accusing Pope Francis of not having distanced himself enough from the Argentine military dictatorship in the 1970s. But none of the charges have stuck. (15.03.2013)

An Argentine court has sentenced former dictator Jorge Videla to 50 years in jail for stealing babies from political prisoners. There were also heavy penalties for others involved in the practice. (06.07.2012)