Argentina's President Alberto Fernandez suffered a severe setback in midterm legislative elections held on Sunday, with his ruling Frente de Todos (Front for Everyone) coalition losing control of the Senate for the first time in almost 40 years.

With over 90% of votes counted, the coalition — made up of a collection of Peronist and leftist parties — looked set to drop from 41 to 35 seats in the 72-member Senate.

It could also lose its position as the biggest bloc in the Chamber of Deputies, the lower house of Congress.

The triumph by the center-right coalition Juntos por el Cambio (Together for Change) will mean a tough final two years in office for the president.

The conservative opposition, which was badly defeated in a presidential election two years ago, won almost all the key races in the legislative ballot, as voters turned away from the government amid
widespread discontent over a deepening economic crisis, spiraling inflation and rising poverty.

In the country's most populous province, Buenos Aires, some 39.8% of voters cast their ballot for the opposition, with 38.5% supporting the ruling coalition, according to results published by local newspaper La nacion.

Economy tops agenda as Argentinians go to the polls

Why are people angry at the government?

Argentina's economy has been in recession since 2018, with GDP slumping by as much as 9.9% last year due to the COVID-19 pandemic.

The country has one of the world's highest inflation rates, at about 40% so far this year. And the nation's currency has been hitting record lows against the US dollar despite strict capital controls.

Poverty, meanwhile, affects more than 40% of Argentines and exceeds 50% among children. Unemployment is near 10%.

Public perceptions of rising insecurity and a series of scandals, including violations by Fernandez and those close to him regarding pandemic health restrictions, have also hit the ruling coalition's popularity.

What does the outcome mean for the president?

Losing control of the Senate means that the president will be forced to negotiate with the opposition every initiative he sends to the legislature, which would make it extremely tough for him to push through any laws for the rest of his term.

It will also make it difficult for him to make key appointments, including to the judiciary.

"Such a result would almost certainly relegate Alberto Fernandez to 'lame duck' status for the rest of his term,'' Jimena Blanco, director of research and risk analysis for the Americas at the Verisk Maplecroft consultancy, had told The Associated Press before the results were announced. 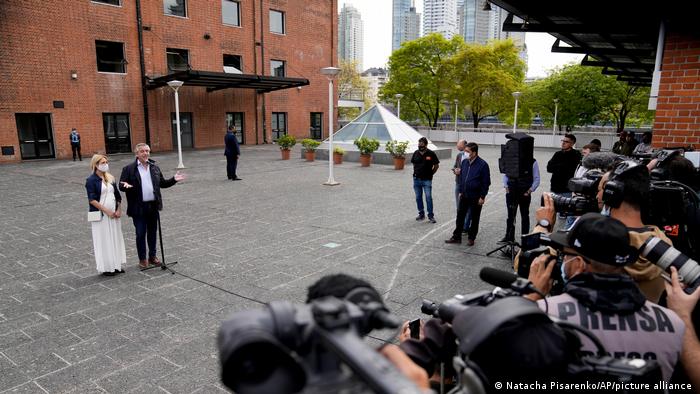 After casting his ballot Sunday, President Fernandez vowed to fight on regardless of the result

The result could also widen the cracks in the ruling coalition, particularly between the president and his powerful vice president, former President Cristina Fernandez de Kirchner.

Both have already had public disagreements over economic policies.

The election outcome weakens Fernandez at a time when pressure is rising to strike a new deal with the International Monetary Fund to roll over $45 billion (€39.3 billion) in debt payments the country cannot make.

In an address to the nation, the president went on the defensive and called for "patriotic" cooperation from the opposition, stressing that he would approach opposition groups to try to find common ground on an agenda.

"An opposition that is responsible and open to dialogue is a patriotic opposition," he said, adding that he hoped for cooperation that would be "fruitful, for the general interests of the country."