Are there any ′hot′ cultural policy issues in the German election campaign? | Culture| Arts, music and lifestyle reporting from Germany | DW | 13.09.2017

Are there any 'hot' cultural policy issues in the German election campaign?

Cultural policy does not exactly top the priority list of the parties running for the upcoming German election. Yet a few topics have been grabbing the media's attention. Insiders discuss why they matter. 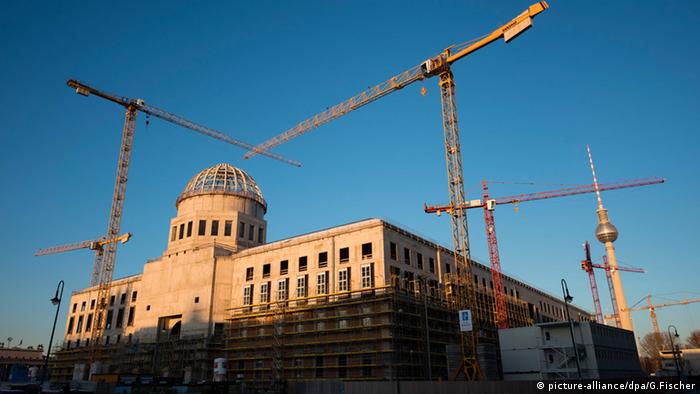 Gallery owner Rudolf Zwirner really gets going when he starts talking about the Act to Protect German Cultural Property (Kulturgutschutzgesetz). The 84-year-old, who was one of the founding members of the international art fair Art Cologne, believes that the German art trade is in danger. And he's annoyed. "Trade is now only occurring abroad," he said. "If there is no art trade, then art collections will cease to evolve in Germany as well." 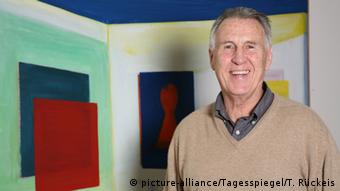 The legislation has been in effect for a year. It is intended to regulate the import and export of art and antiquities, among them cultural assets that are considered to be of "national significance."

But just ahead of federal elections on September 24, the topic is headlining newspapers' cultural pages.

Gallery owner Zwirner has even taken out an advertisement himself, appealing to voters to choose the Free Democratic Party. or FDP, a free-market liberal party. Zwirner told DW that he's not normally an FDP voter, but the party is the only one calling for a revision of the cultural property protection legislation.

The act stipulates that the export of artworks which are 75 years old or older and reap a price of 300,000 euros ($359,000) or more require an export permit even within the EU internal market. Zwirner said that many art dealers are overwhelmed by the administrative expenses alone.

German Culture Minister Monika Grütters was the one who pushed for the strict import requirements – not least to prevent the illegal trafficking of looted art by terror organizations such as the "Islamic State" terror group. 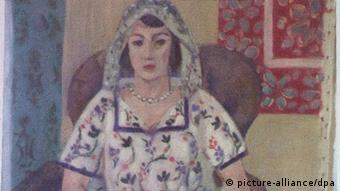 Nazi-looted art: This Matisse painting was returned to the heirs of the rightful owner

The so-called "Gurlitt Affair" also developed during her time in office, where over 1,500 works of art believed to have been stolen were found hoarded in the apartment of a German art collector. The case revealed just how many pieces of art looted by the Nazis were in the clutches of private collectors. It's a topic that will remain relevant within cultural policy even in the next legislative period.

As the country's culture minister, Grütters is a direct subordinate of German Chancellor Angela Merkel. In an interview, she told the weekly newspaper Die Zeit that she is proud to have supervised the passing of the Act to Protect German Cultural Property during her period of office and to have thus established in national legislation the UNESCO Convention for the Protection of Cultural Property.

Taking stock of her legislative period, she's pleased, noting that her budget now registers at 1.7 billion euros ($2.03 billion) and her office employs some 300 people.

The list of issues she has been able to advance is long: from the promotion of film to the construction of new cultural buildings such as the Berlin Palace and the Museum der Moderne, from supporting female artists to the Act to Protect German Cultural Property. 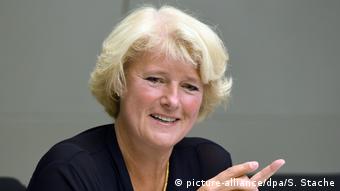 Monika Grütters is satisfied with the Culture Ministry's achievements

Grütters has achieved much, said Olaf Zimmermann of the German Cultural Council, the umbrella organization of Germany's national cultural associations. "She has addressed a lot of topics; she's managed to continually get her budget increased and she has been able to garner increasing respect for her office," Zimmermann told DW.

"That also applies to the controversial Act to Protect Cultural Property," he added. "We have supported Monika Grütters in this move to nationally legislate the protection of cultural property."

Yet all of these topics aren't really of interest in the electoral campaign. Matthias Jung, director of the research group "Elections," cannot recall that it has been any other way in the past. And he's been researching elections for the past 30 years. "The cultural sections of newspapers may be full, but not many people read them," Jung told DW.

"Culture is a high-brow subject and does not play a major role in electoral campaigns," Jung added. People are much more interested in internal and social security, he noted. Hence, it is not surprising that culture is pretty low on the list of priorities in the electoral policies of the various parties, he said.

Cultural policy is "high culture" in Germany and mainly addresses theater and opera, according to sociologist Helmut Anheier. The president and dean of Berlin's Hertie School of Governance sees two points of intersection that are significant for the future, but which have been neglected in the past: culture and education. He also noted that new media in particular have always been slightly separate from cultural policy. "I can't actually even think of a lighthouse project in which the cultural benefits of new media are highlighted," he said.

While the ruling Christian Democratic Party (CDU) continues to focus on "lighthouse projects" of international significance in its electoral campaign, coalition partner SPD (Social Democratic Party) aims to debunk the notion of high- and sub-culture. "For us, there's only one kind of culture," their electoral program touts.

And that's precisely what voters should have more access to – by having more of it introduced into schools and by developing more museum education programs.

Just ahead of the federal election, the Hertie School of Governance has published a study that confirms the good reputation of the German government in foreign cultural policy. Cultural institutions such as the Goethe-Institut, the German Academic Exchange Service, the Humboldt Foundation and partner schools abroad compose an excellent network, the study said. All parties in German Parliament view foreign cultural and educational policy as a favorable contribution to international understanding. All of the parties aim to preserve and expand dialogue via help from the cultural institutions, the study said.

"I think there is broad consensus among the parties, just as there is in many areas of this election campaign," Anheier said. But that is precisely why election campaigns cannot actually be won via cultural policy, he noted. "The German Cultural Council compared the positions of the parties based on 14 different demands," he said. "All of the parties responded except for the AfD (Eds. right-wing) party. You can find a lot of consensus in the way parties view cultural policy."

Education and digitization are major issues

Instead, intersecting topics such as education and digitization, which also have an impact on the economy and on science, are emphasized in electoral policies and campaigns.

None of the parties which currently hold seats in German Parliament – that means, along with coalition partners CDU (Christian Democratic Party) and SPD (Social Democratic Party), also the Greens and the Left Party – tire of stressing the need for more investment in education. That's because, as studies continue to show, children's education still continues to depend on the level of income and education of the parents.

Education also plays a role in the area of digitization.

The Greens, for instance, want to promote more programs for digital education and media competence. All of the parties also advocate the preservation of cultural heritage via digital media. They make a case for the expansion of the German Digital Library and the digital rescue of film heritage.

The Left party is particularly keen on the latter. Recalling history via digital means also plays an important role for the parties, such as viewing Germany's colonial or Nazi past, or documenting the GDR's Stasi history.

Cultural integration as a chance for social cohesion

There's one thing in particular that is important for the German Cultural Council in its list of demands on the political parties, and that is "strengthening cultural integration as a chance for social cohesion." All of the parties that have the possibility of grabbing seats in Parliament provided their positions on those demands, except for the right-wing populist AfD party.

Instead, the AfD (Alternative für Deutschland) is placing its bets on "Heimatkultur" ("homeland culture") and is taking a clear stand against a multicultural society. All of the other parties aim to advance the initiatives of the Cultural Council – not least, to better integrate the many refugees in the country. 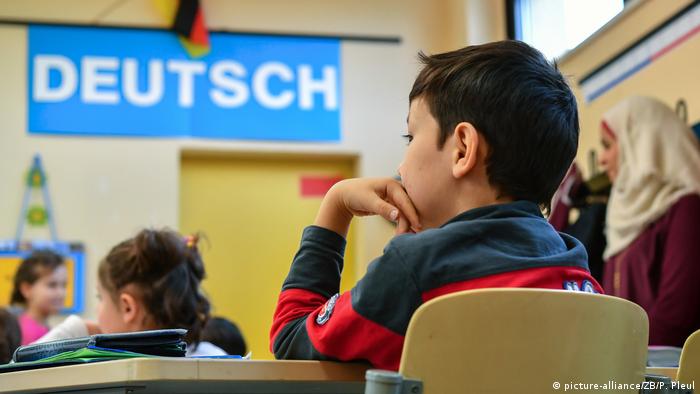 Culture contributes to the integration of refugees

Cultural Council director Olaf Zimmermann criticized that the topic hardly plays a role in the election campaign. Politicians must take a more intense look at the matter, he said. "But the media is also at fault for not discussing cultural policy more closely," he noted. "If they were to do that, then politicians would quickly redirect their attention."

Read more:Why Germany's culture scene is calling for its own government ministry

However, in the lead-up to the federal election, the German Cultural Council cannot complain about a lack of media attention on cultural policy. 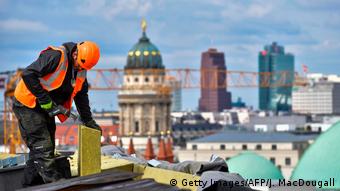 Construction on the Berlin Palace: There will be many more issues to build on in the upcoming term

In addition to the debate over the Act to Protect German Cultural Property, the Humboldt Forum museum project is once again in the limelight. In the name of Alexander von Humboldt, the museum is supposed to present ethnological collections in a modern fashion in the renovated Berlin Palace. That begs the question as to how one should deal with looted art from colonial times and how citizens – and that includes people from the objects' countries of origin – can participate in these decisions.

The government's plans for 2018

As far as the Act to Protect Cultural Property goes, Culture Minister Monika Grütters has already announced an evaluation planned for the coming year.

She also aims to rethink and further develop the tasks and goals of her own office, which has been in existence for the past 20 years, should she continue to be responsible for culture and media in the Chancellor's Office following the upcoming election. After all, there's plenty to do – for Grütters or anyone else.