Shanghai is often described as the biggest building site in the world. Architect Albert Speer, Jr., has risen to the challenge, and he's put an uncomfortable family connection behind him on the way. 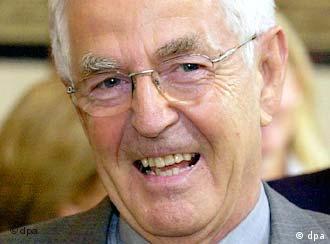 The last decade has seen over 2 million people relocate to Shanghai as more and more ambitious building projects are realized. Innovations include some 5,000 gleaming new highrises, over 1,000 new streets, three subway lines, a new airport and an entire inner city highway infrastructure, complete with three mammoth bridges over the Huangpu River.

German planners and architects are among the many international experts flocking to Shanghai to help shape the future of the world's fastest-growing city with diverse urban development initiatives.

The Frankfurt-based architectural team AS&P has had an office in China since 1999. In 2001, it won an international competition for the design of the Shanghai International Automobile City, and it has been scooping up regular urban planning contracts ever since.

In Shanghai's current climate of architectural experimentation, AS&P practices ecologically friendly, sustainable urban development, and these days, it's an established name in China.

But what really sets AS&P apart is its historical baggage. Now one of Germany's most successful architecture practices, it's headed by Albert Speer Jr., who has the unfortunate historical stigma of having been born the son of Hitler's favorite architect.

Albert Speer Sr. died in 1981, having been sentenced at the Nuremberg trials to 20 years in Berlin's Spandau prison. He was released in 1966, but father and son were never close. In interviews, Speer Jr., is reluctant to talk about his father's legacy, but there have at times been parallels in the scale of the two mens' work. For like his father, Speer Jr. is an architectural success story.

AS&P scooped the coveted commission to build a new soccer stadium in Munich for the 2006 World Cup in Germany. Berlin's Olympic Stadium, scene of the 1936 Olympics and memorably showcased in the infamous Leni Riefenstahl film Olympia, was built by Albert Speer Sr.

It's just one example of Speer Jr. following in his father's footsteps. The architect also won the contract to prepare the eastern German city of Leipzig's bid for the 2012 Olympics -- while back in the 1930s, his father began revamping Berlin as the capital of the Nazi's supra-German state by building the Olympic Stadium.

In fact, Speer's work couldn't be more different to that of his father. His architectural vision, laid out in his 1992 book The Intelligent City, is of a socially progressive, humane metropolis.

In an interview with the architecture magazine Metropolis in 2002, he described his work in China as "knowledge transfer" on sustainable development.

"We're trying to network planning, infrastructure, and utilities--to save energy and resources, and preserve the environment," he said. "I'm convinced that in five years they will be able to do it all without us -- they are good learners. My task is to help them along the way."

One of AS&P's Chinese projects is the so-called "German Town."

Seven satellite towns are currently being built outside Shanghai based on European models. "German Town" will be situated in Anting Town, Jiading District, home to an international automotive center. The project entails the construction of various German-style buildings, and Speer Jr. is more aware than most that it's a concept steeped in perjorative associations.

"Obviously, we won't be trying to recreate Rothenburg ob der Tauber," he pointed out in an interview with public broadcaster MDR. "We want to build a small, modern town with, for example, tiled roofes. Visually, the streets will be different to what the Chinese are used to, they'll be slighted curved and lined with trees."

Rather than Germany's traditional half-timbered style, he says, the town "will have the same sort of atmosphere as a modern residential estate."

Another plan involves a vast north-south axis running from Beijing's Olympic Village to the city's Forbidden City and finishing at the new train station which links Beijing with the rest of China.

Predictably, it's a project that many back in Germany have already compared to Speer Sr.'s "Germania" vision for Berlin.

In China, Speer Jr. stresses, his expertise is all that matters. No one here ever asks him about his father. And if they did, he wouldn't likely have much to say.

It may not be quite as recognizable as the Louvre’s glass pyramid in Paris, but Berlin this weekend gained its own glass and steel treasure with the opening of a new exhibition hall designed by star architect I. M. Pei. (May 25, 2003)

The Nazis compiled a secret list of “divinely gifted” artists, who received favorable treatment in return for entertaining the masses. The list included Dutch-born actor Johannes Heesters, who turned 100 on Friday. (Dec. 12, 2003)