′Arab Spring started in Western Sahara′ | World | Breaking news and perspectives from around the globe | DW | 18.06.2012

In the wake of the ongoing unrest across the Arab world, voices from the forgotten Western Sahara conflict claim their role in the so-called Arab Spring. DW talked to a Western Sahara independence activist. 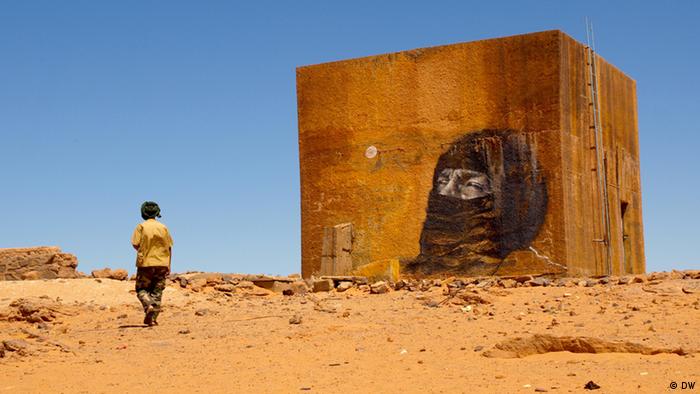 Sidi Ahmed Talmidi was one of the nine-member group responsible for the negotiations with the Moroccan government during the events in Gdeim Izik camp in Western Sahara in October 2010 (Camp established to protest against ongoing discrimination, poverty and human rights abuses, some protesters also demanded independence for Western Sahara. The protests were initially peaceful, but turned violent following clashes between civilians and security forces - the ed.). Seven members of the original group are in prison and have recently started a hunger strike while they await trial. DW spoke to Talmidi, one of those still free, at the Sahrawi refugee camp in Western Algeria.

DW: What is the current situation in Western Sahara under Moroccan control?

Sidi Ahmed Talmidi: Morocco has turned the area into a massive prison. Nobody feels safe, not even inside their houses. People are constantly harassed, dragged out from home in the middle of the night and either taken to prison or even "disappeared." Their corpses are often found brutally mutilated in the middle of the street. The last case happened four days ago when the body of a man called Hamdi Tarfany was found chopped into pieces in Laayoune, the administrative capital of the region.

It's been like this since former colonial power Spain pulled out in 1975 and left us in the hands of the Moroccans who invaded our land. Rabat claims that we have the same living standards as in the rest of Morocco, and that we also enjoy a democratic system but that's far from being true. These violations have been recognized by almost everybody, even the UN recognizes the Polisario Front (Sahrawi rebel national liberation movement - the ed.) as the legitimate representative of the Western Sahara people.

Morocco and the Polisario Front fought a war over the territory for 16 years until a UN-brokered cease-fire took effect in 1991. What have you achieved in those 21 years? We laid down our weapons because we were promised a referendum. The MINURSO, the United Nations Mission for the Referendum in Western Sahara, produced a census but Morocco has managed to block the lists until today. Basically, we have achieved absolutely nothing. Most of our people have turned into refugees in the middle of the Algerian desert - between 200,000 and 275,000 depending on the source - and we are struggling to survive. On the other hand, Rabat has obtained massive benefits in these two decades. They are exploiting our mineral and fishing resources thanks to France's complicity and the UN inaction. The MINURSO staff are just getting paid by the UN to stay in a comfortable scenario for them. They have no mechanisms to monitor human rights in the area mainly due to the massive hurdle the French UN veto poses.

You were one the members of the negotiation group during the events in Gdeim Izik camp in October 2010. How do you remember those days?

On October 9 we set up a camp around 12 kilometers outside Laayoun because we wanted to conduct a peaceful demonstration and avoid frictions with the Moroccan settlers downtown. There were nine of us in the negotiations group. We wanted to remind the world that we have been a Moroccan colony for over 35 years so people would walk all the way to where we stayed to join us. After a month we were around 30,000 Sahrawis gathering at the camp.

We were asking for our most basic rights and protesting against the Moroccan government and monarchy. We have nothing against the Moroccan people, in fact, many of them are also facing very dire conditions under Rabat's rule. On November 8, Moroccan police and special forces raided the camp in the most brutal way. There are no words to describe what we all witnessed that day; it's hard to believe such things can happen in the 21st century. The day before the raid, the government publicly accused eight of us of kidnapping all those gathering at the camp. How could we possibly hold thousands captive?

Morocco claims that 18 policemen died during the event but no Sahrawis whatsoever. The Polisario Front puts the Sahrawi death toll at 38 with hundreds more injured. What's your stance?

I could give you a lot of names of protesters killed by the Moroccan police. Fourteen-year-old Nagam Gareh was killed inside a car that was carrying supplies for the protesters; Brahimd Daudi and Babi el Gargar were among those killed in the shooting… Nonetheless, it's impossible to quantify the dead and injured as our people were even denied medical assistance in the hospitals. Besides, I have no clues on the whereabouts of many friends. A lot of people disappeared after the events.

Disinformation on our conflict is endemic so it came as no surprise when the media was denied access to Gdeim Izik. Even Al Jazeera was immediately expelled from Morocco after they started talking about the issue. We could say that the Arab Spring started in Morocco-controlled Western Sahara, and not in Tunisia. If we had achieved just a tiny percentage of the attention Tunisia or Egypt would get two months later, the political scenario might be significantly different today.

How can this conflict be unblocked?

The only hope for the Sahrawis is to get the UN to recognize that Morocco does not want to take any further step toward the peace plan. Time is on Morocco's side so international pressure is mandatory to force Rabat to sit down and negotiate. However, Morocco's refusal would mean to go back to war. Today I think that the only solution for Western Sahara is full independence, and not any sort of autonomy as Rabat has suggested. The latter would mean to continue under their occupation, hence being treated like animals. The majority of our people live like refugees in the middle of the desert because they cannot go back home. We are exhausted and we cannot cope with this situation any longer.

In contrast to 2011's revolutionary Arab Spring in Tunisia and Egypt, change in Morocco is milder - due in part to the nation's monarch. But for many Moroccans, social reforms are more pressing than more democracy. (07.06.2012)

Algeria opts for status quo rather than experimentation

There have been no uprisings in Algeria comparable to those in other Arab states. Though young people unhappy with the government make up a large part of the population, mass protests cannot be expected. (24.04.2012)