Arab refugee women in Germany torn over romantic relationships | Germany | News and in-depth reporting from Berlin and beyond | DW | 03.01.2017

Many young Arab refugee women in Germany could face a backlash from their families if they pursue romantic relationships outside of marriage. How do the women themselves view the matter? 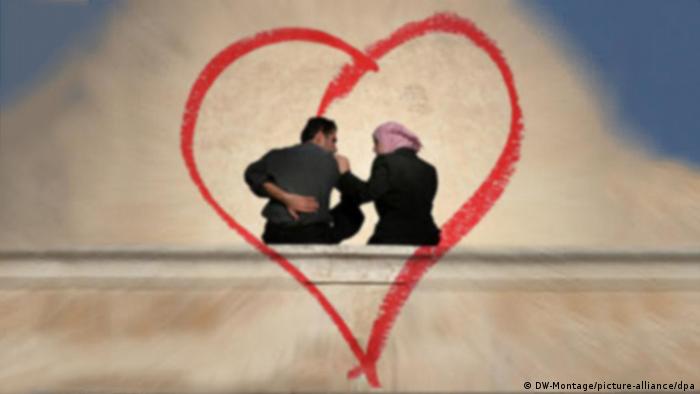 The nature of romantic relationships is different in Germany than in Arab societies, being less restricted and more open.  Concepts of love and marriage differ between Germany and the Arab world owing to cultural norms and traditions.  Sexual relations, cohabitation and having children outside of marriage are normal and acceptable in Western societies. For Arab societies, however, quite the opposite is the case, and even debate on these subjects is taboo. Arab refugees of the younger generation in Germany, particularly young women, are torn between these two perspectives.

Rama, a Syrian in her twenties, came to Germany with her mother last year to escape the horrors of war.  She's learning German at the advanced level at the moment so she can prepare for university study. Western society and Germany in particular did not really shock her, she explained. She says she has adjusted to the  lifestyle in this country, especially with regard to its openness. She is only not used to seeing small things, such as kissing in public.

"I respect the freedom of this country very much and am impressed by the German view of personal space and the way they live their lives. However I can not act like them regarding romantic relationships, as I am a Muslim from a Muslim family and I want to maintain the customs and traditions that I grew up with.  Even if I were born in Germany, I would have this perspective,” Rama said in an interview with DW Arabic.

She then adds: "Romantic relationships and having kids should be confined to marriage. I will only get married to an Arab man, as a large cultural gap exists between me and the Germans, the easiest part being the language!" 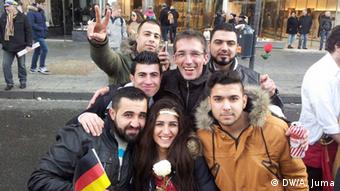 Rama knows exactly what she wants, but the situation is different for others, especially teenage girls. They  are surrounded by peers who chat about romantic flings, and must separate their lives at school from life with the family. These younger refugees face a tough cultural barrier - they do not dare ask their families about many of the questions they have about relationships.

This is the internal conflict that many women face, such as 17-year-old Sara (not her real name) from Syria. Sara has been living in Germany for about two years now. She describes her life as being divided between "at home" and "in public."  On the one hand, she agrees with the customs and traditions she grew up with at home, but she is also is open to the German way of life. This is a source of internal conflict for her:  She is living a Western lifestyle as a teenager in public alongside her friends but at the same time she cannot shake off the more conservative Eastern ideals she grew up with. "Maybe I will decide when I begin university, but in any case, do not tell my mom about this conversation," she told DW.

The role of parents 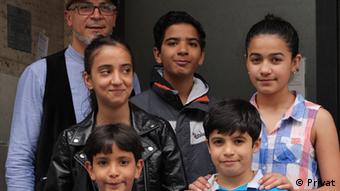 Renee Abu al-Alaa, director of an Arab family care center in Berlin, explained that the conflict experienced by young women and men  because of the differences between their conservative  families and the more liberal environment surrounding them was significant, and could lead to serious problems. She told the story of  a 13-year-old Iraqi girl who fled from her family to a humanitarian organization for fear of being killed after nude photographs of her had been published. To Abu al-Alaa, this story is a clear example of how serious these problems can be.

Speaking with DW Arabic, Abu al-Alaa stressed the importance of the role of parents at this stage: "Immigration is really difficult, but parents can foster dialogue and understanding with their kids instead of intimidation in order to gain their trust and answer their questions."

On the other hand, there are very few young women who dare to rebel against the customs and traditions of their Arab background and adopt a Western lifestyle.  Hana (not her real name) is a 24-year-old Syrian university student who is critical of the concept of honor and other traditional values in Arab societies. This was one of the most important reasons behind her journey to Germany three years ago to get away from the Syrian war. She feels  that the conservatism of the society she grew up in contradicts her own beliefs.

Hana has lived with her German boyfriend in a student apartment for several months. This is a step that she would not have dared to take if she were in Syria.  "I wouldn't have made a decision like this in Syria because society would reject it completely and it would tarnish my entire family's reputation. Here in Germany it is different, because people don't look into your personal life and they don't a require a certificate of marriage for a couple to live together. I feel more freedom and confidence to make my own decisions. This is my life and my body," she told DW.

However,  she admitted: "I, of course, did not tell my family back home about this decision to live with my boyfriend."

Syrian refugees waiting in refugee camps in northern Greece find themselves worrying about their families left behind and the future of their country. Marianna Karakoulaki and Dimitris Tosidis report from Thessaloniki. (03.01.2017)

Jordan said it would issue work permits to help Syrian refugees build lives. But advocates have been surprised by how hard it's been for the newcomers to land legal jobs - and they're not sure why, reports Bethan Staton. (30.12.2016)