Anti-Semitism remains prevalent in German society | Germany | News and in-depth reporting from Berlin and beyond | DW | 23.01.2012

A new report has found that one in five Germans harbors anti-Semitic feelings. This puts Germany at about the mid-range among European countries. 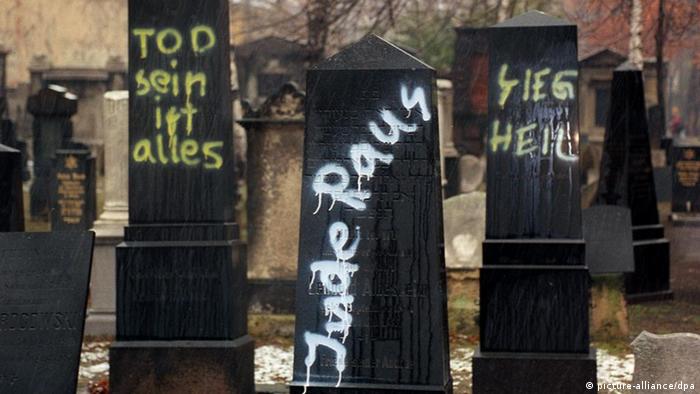 Most actual crimes are committed by right-wing extremists

A report released on Monday suggests that one in five Germans harbors "latent" anti-Semitism.

The report, which was prepared by an independent commission appointed by the German parliament, found that about a fifth of Germans agreed with anti-Semitic statements such as "Jews have too much power in business."

"Anti-Semitism in our society is based on widespread prejudices, deeply rooted cliches and on sheer ignorance about Jews and Judaism," one of the authors, the London-based German history professor Peter Longerich, told reporters at a press conference to unveil the report in Berlin.

The report says that anti-Semitism permeates well into the mainstream of society, and it quotes children as using the words "you Jew" as a derogatory term on the playground.

It also quotes chants from crowds at soccer matches involving Jewish teams, shouting things like "Jews to the gas chamber," or "bring back Auschwitz."

At the same time, though, it notes that the vast majority of anti-Semitic crimes are committed by right-wing extremists, who are estimated to number only about 26,000 of Germany's more than 80 million inhabitants.

The perils of the Internet

The report calls for better coordination of local, state and federal strategies to combat anti-Semitism, and it sees the Internet as a major problem.

"With regard to modern forms of communication - we point to the Internet in particular - it is virtually impossible to prevent the spread of such thinking," Longerich said.

The report notes that the Internet provides a platform for spreading all kinds of extreme ideas, with anti-Semites, Holocaust deniers and Islamist extremists all using it extensively to promote their goals.

The deputy speaker of the German parliament, Wolfgang Thierse, warned that anti-Semitism was not only present in the form of the sort of spectacular events that tend to be covered in the media.

"Anti-Semitism is a constant phenomenon," the Social Democrat politician said, adding that this required an ongoing response.

The report put Germany in the mid-range of European countries in terms of the prevalence of anti-Semitism, well behind countries like Poland, Hungary, and Portugal.

The German government has proposed a new database to coordinate the fight against violent neo-Nazis. It would bring together information currently stored in multiple agencies around the country. (18.01.2012)

Amid growing anti-Semitism in the Netherlands, Dutch Jews admit they are frequently the victims of harassment and attacks. Increasing religious prejudice is forcing many to question just how tolerant the Netherlands is. (23.04.2011)