Anti-Semitic Slurs at Soccer Game Spur Action Against Racism | Germany| News and in-depth reporting from Berlin and beyond | DW | 15.10.2006

In the professional soccer stadiums, racism has gone underground but is on the rise in the local leagues and in eastern Germany, according to a recent study. A game last week in Berlin is a disturbing case in point. 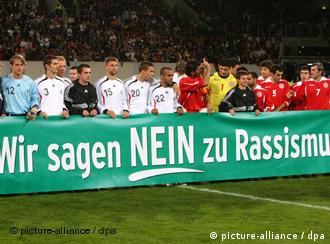 The incident also supports a study presented last week in Berlin by the Federal Institute for Sports Science, which indicated that, while racism is increasingly being practiced in professional stadiums with subtle codes and hand signals, it is still very apparent in the minor leagues.

"When we went onto the field, I heard a few comments like 'Germany isn't a Jewish republic' and 'no Jewish state,' so I went over to the referee and told him about it," said Vernen Liebermann, a player for the Jewish soccer team Makkabi. "He said he would stop the game as soon as he heard something.

But referee Klaus Brüning has repeatedly testified in court that he didn't hear a thing. For 24-year-old Liebermann, whose grandparents had survived life in a Nazi ghetto, the evening game quickly turned into a nightmare. 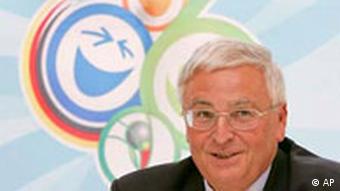 "At first, we just kept playing, but we got more and more nervous because every 10 minutes someone would shout 'Jewish pig' or 'burning synagogues,'" Liebermann said.

The disruption came from a group of men standing next to the players' bench on the Altglienicke side. Beer bottles in their hands, the chants grew louder. The Makkabi players endured the humiliation for over an hour. Then, in the 78th minute of play, Makkabi defender Raffael Tepmann shouted back at the chanters: "Shut up, boys!"

Tepmann was given a yellow card.

"Then I approached the ref and told him that if he had one ounce of respect for the history of this country he had to do something and help us," Liebermann said.

Liebermann was then given a red card.

When he refused to step off the field, the whole Makkabi team left together to avoid an escalation. Threats were made against the team, but the police didn't arrive until an hour later.

Concerns about right-wing extremists in the area

After being informed of the incident later that evening, Altglienicke's youth coordinator Sven Klebe offered Makkabi a written apology -- the only one that came from his team.

Just a week earlier, the far-right National Democratic Party had won 18 percent of the votes in that district. Klebe said he was concerned that right-wing extremists could influence his soccer club.

"We have taken security measures to ensure that a similar incident doesn't occur at the championship game," Klebe said. 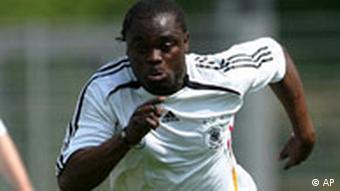 Gerald Asamoah is a member of the German national soccer team

Theo Zwanziger, head of the German Soccer Federation (DFB), has spoken out against racism and encouraged the individual soccer clubs to put a lid on racist disturbances.

When racist slurs were made in early September against Germany's Ghana-born national player Gerald Asamoah, DFB fined the opposing team Hansa Rostock 20,000 euros ($25,000). The team was also required to play one home game without spectators.

The fine is the highest DFB has ever imposed because of racism and the precedent-setting case is seen as a message to soccer clubs that they are responsible for their fans' behavior.

The authors of the study on racism by the Federal Institute for Sport Science recommended improving communication between fan groups, soccer clubs and the police.

As an example, organizers will distribute symbolic red cards to spectators on the eighth game day in the season as part of a campaign called "Give Racism a Red Card."

As for Makkabi, things aren't back to normal yet. Some of the regular players are afraid to play in eastern Berlin where right-wing tendencies are higher. A TV crew films the team's practices and plain-clothes police officers accompany them to matches.

"We don't really want to play soccer under police supervision," said the team's director, Claudio Offenberg. "We hope that the situation will stabilize."

Makkabi's umbrella organization in Berlin, the House of Soccer, is expected to announce a verdict on the case on Monday, Oct. 16.

Following several recent cases of racist behavior in German stadiums, top soccer officials have vowed to impose harsh penalties on clubs who are unable to keep their fans under control. (19.09.2006)

The World Cup as a Platform For a Good Cause

FIFA has taken a taken up a social cause--condemning racism-- as a prelude to the matches. The use of star striker Miroslav Klose also brings attention to the campaign against landmines. (05.07.2006)

National Soccer Team Redefines What it Means to Be German

As nearly one-quarter of the German soccer team have foreign roots, cheering for the home boys means coming to terms with a Germany that has become increasingly diverse ethnically. Or does it? (20.06.2006)