Thousands of people have formed a human chain around the city of Dresden to protest against a far-right march on the 66th anniversary of the Allied bombing of the city during World War II. 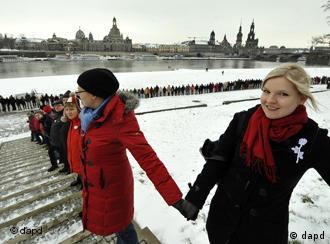 The Allied bombing of the eastern German city of Dresden during World War II has in recent years become an opportunity exploited by far-right groups holding demonstrations.

This year, however, some 17,000 people braved freezing temperatures on Sunday to protest against the neo-Nazis by forming a giant human chain around the city.

The thousands of people wore white roses pinned on their lapels and encircled the city center for 10 minutes while bells tolled from the churches. The White Rose was the name given to a group of students in Munich who opposed Adolf Hitler's regime.

"When we remember the victims of the Dresden bombings today, we remember all the victims of Nazi violence and World War II," said Detlef Sittel, Dresden's mayor. "There are so many people here who want to express their opinion clearly and make Dresden a tolerant, friendly and strong city, open to the world." 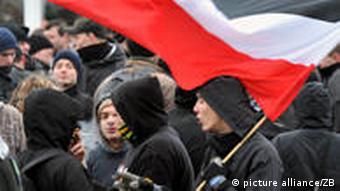 Over 1,000 far-right extremists gathered in Dresden

"The people of Dresden are defending their remembrance," said German Interior Minister Thomas de Maiziere, who participated in the event along with other politicians.

Several hundred people also attended a wreath-laying ceremony at the cemetery where many of the bombing victims are buried.

State Premier Stanislaw Tillich said the people had "once again made clear the city is theirs and that there is no space for rightist extremists."

There was a large police presence in the city, as in previous years there have been clashes between far-right groups and anti-Nazi protesters. Some 1,300 neo-Nazis gathered for their so-called "funeral march" at Dresden's main train station.

The leak of thousands of confidential e-mails from members of Germany's far-right National Democratic Party shows the group is soaked in racist and neo-Nazi ideology. (13.02.2011)

The Roma community will for the first time be the guest of honor at official Holocaust Memorial Day commemorations in Germany, after a long battle for recognition for Sinti and Roma victims of Nazi persecution. (27.01.2011)