Anti-Muslim groups gain ground in Britain and across Europe | Europe | News and current affairs from around the continent | DW | 24.10.2010

Anti-Muslim groups gain ground in Britain and across Europe

The anti-Muslim English Defence League has staged more than 10 violent demonstrations across England since forming last year. Now the group is taking its far-right rhetoric to continental Europe. 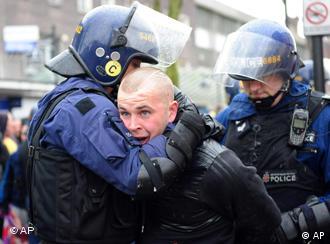 The EDL has clashed with the police at its protests

It's a street movement that has grown so rapidly in size some call it the biggest threat to social cohesion in today's Britain.

The English Defence League (EDL), an anti-Muslim group drawing supporters from the far-right, now can expect a thousand supporters to come out in protest nearly anywhere in England - demonstrations which often descend into violence and racist, Islamophobic chanting. Now they're taking their far-right rhetoric to Europe. 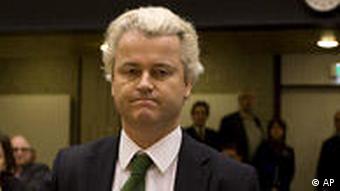 Geert Wilder's rhetoric has landed him in court

They had been planning to gather in Amsterdam on Oct. 30 to show support on what was originally to be last day in court for Geert Wilders, the anti-Islam Dutch politician charged with inciting hatred and discrimination against Muslims. On Oct. 22, however, a Dutch court ordered a retrial with a new panel of judges. It wasn't immediately clear how this would affect the EDL's plans.

Despite such of rhetoric, Robinson and other prominent EDL members maintain they are a non-racist, non-violent organization and that their only goal is to fight what they see as extreme Islamists threatening the democratic fabric of the Western world. They say they welcome members of all colors and backgrounds, and hold up one prominent Sikh member as an example of this. They also vehemently deny charges of being neo-Nazis, and often carry Israeli flags in their demonstrations.

Weyman Bennett is one of many who do not accept the EDL's own version of themselves. He is the leader of the pressure group Unite Against Fascism.

"The English Defence League are a mish-mash of football hooligans, Nazis, malcontents, some people with a clear political ideology about which way they want to go," he told Deutsche Welle.

"And people are saying there is a crisis in Europe and that Muslims are to blame, in the same way as they blamed Jewish people."

Bennett says the EDL has attacked his group's meetings, beating people up, and have put pig heads outside mosques to insult Muslims.

Anti-fascists look to join forces too

If far-right street movements are finding common ground across the EU, some warn it's time for anti-fascist groups and mainstream politicians to react.

"I think not since the 30s have we seen waves of these levels of bigotry and we have to do something to fight it," Bennett said.

Glyn Ford, a former member of the European Parliament from Britain's Labour party, agrees. He's the national treasurer of the Anti-Nazi League and the author of the book Fascist Europe. 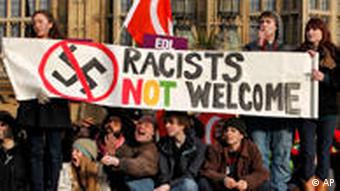 Anti-fascist groups say they need to band together

"Clearly this is not a British problem, it's not a Dutch problem, a German problem - it's a problem for Western-style democracies all across the European Union," he said. "The fact that extreme right-wingers and neo-fascists are starting to get together really for me is a message that all the anti-fascist organisations all across Europe also need to work together," he added. "It's not a surprise to me that they find, if you want, fellow feeling with the likes of Geert Wilders or Jean-Marie Le Pen's Front National or the Freedom Party in Austria or the Republikaner in Germany or whatever."

Hordes of mainly young men brandishing the Cross of St George and chanting anti-Muslim and racist messages have become an embarrassment for the UK government, which earlier this month banned a planned EDL march in Leicester.

Former London Mayor Ken Livingstone says politicians need to address the underlying causes of the rise of organisations like the EDL.

"Fascists, wherever they are, feed off poverty, homelessness, all those things, and you got to have a much better and fairer welfare state if you're to tackle them," he said. "But also I believe that a lot of politicians who ignore them, don't give them publicity, have to take them on and say, you know, this is the ideology that led to the greatest loss of life in human history - some 35 million people died in World War II because a small group of mad Nazis felt there were racial differences that made some people sub-human."

Wins for the right across Europe

Livingstone worries that Europe as a whole has taken a wrong turn too far to the right.

"You see even in Sweden there's a far-right party voted into parliament," he said. "All over Europe: a unanimous vote in the French assembly to ban the hijab, the Swiss banning minarets. I'm afraid all that great 1950s, 60s and 70s confidence of Europe as it rebuilt its industry, created the welfare state - it seems Europe's turning in on itself. And I don't want to be part of that."

The Dutch anti-Islam politician, Geert Wilders, has become the face of the political far-right in Europe. Earlier this month, however, Wilders sought to distance himself from the English Defence League and other groups wanting to show him support in Amsterdam.

The Netherlands' Queen Beatrix has given the go-ahead for Liberal party leader Mark Rutte to form a cabinet. The minority government, relying on an anti-Islam party for support, is not expected to last a full term. (08.10.2010)

Protesters clashed with police after a day of anti-Islam action in the Swedish city. Earlier, right-wing extremists had burned a copy of the Quran and a Danish politician was barred from entering the country.