Lithuania's Parliament has approved a censorship bill that sharply curbs the spreading of public information that lawmakers say could harm the mental, physical, intellectual and moral development of youngsters. 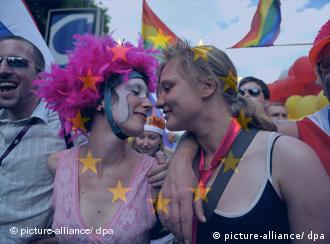 This is not a welcome sight in much of Roman-Catholic Lithuania.

The bill bans 19 examples of "detrimental" information that supporting lawmakers consider harmful to the development of Lithuania's minors. The bill prohibits any information that encourages homosexual, bi-sexual or polygamous relations. It also bans information which "subverts family relations and degrades its values". This includes the distribution of images of heterosexual intercourse, death and severe injury.

The bill's amendments, cover a broad range of other topics, including the paranormal, foul language and bad eating habits.

Lithuania's outgoing president Valdas Adamkus, who retired on Sunday, had been highly critical of the bill and vetoed it in June. Under Lithuania's constitution, at least 71 votes were needed to override his veto, a threshold passed with ease. On Tuesday, 86 of the Baltic state's 141 lawmakers voted in favor of the bill, six were against. Adamkus's successor, President Dalia Grybauskaite, cannot re-impose a veto.

Homosexuality is frowned upon by many in Lithuania. The vast majority of the population of 3.3 million is Roman Catholic.

The bill is passed, but what does it mean, exactly?

The bill comes into law on March 2010 at the latest. Opponents see problems with it though, as it does not specifically define public dissemination nor set down the punishment for offenders. They also argue the law is not only homophobic but will also impose broad censorship and violate Lithuania's commitments as a member of the United Nations and the European Union.

"Parliament has demonstrated its will to institutionalise homophobia," said Vladimir Simonko, head of the Lithuanian Gay League. Human rights group Amnesty International had repeatedly urged Vilnius not to approve the bill.

Lithuania has paid 40,000 euros ($63,000) for a citizen to undergo a full sex change operation because the government missed a July 1 deadline to adopt a domestic gender reassignment law. (03.07.2008)

Poland is debating a bill that would make all material dealing with homosexuality, including educational information, illegal as way of protecting school children from "homosexual propaganda." (14.03.2007)

The homophobic lyrics of several Jamaican reggae musicians has moved the German government to consider blacklisting them and restrict their sales and distribution. (18.07.2008)