Anonymous Holocaust victims set to be commemorated | Europe| News and current affairs from around the continent | DW | 21.01.2011

Jewish organizations have come together in a project to identify and commemorate those buried in Holocaust mass graves across Eastern Europe. Germany's Foreign Ministry has donated 300,000 euros to the project. 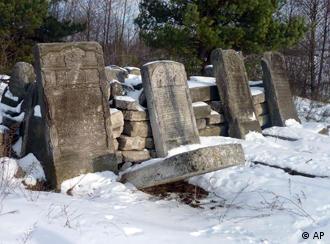 A mass grave in Rava Ruska, Ukraine is one of hundreds of forgotten tombs

International Jewish organizations have come together in an effort to commemorate hundreds of thousands of unnamed Holocaust victims.

Meeting in Berlin on Friday, the organizations announced that they have begun to identify, protect and memorialize thousands of forgotten Holocaust mass graves across Eastern Europe.

The initiative is coordinated by the Berlin office of the American Jewish Committee (AJC) in collaboration with the Central Council of Jews in Germany and the German War Graves Commission. They will oversee work by dozens of groups on the ground in Ukraine, Belarus, Russia and Poland.

Prior to the establishment of concentration camps, hundreds of thousands of Jews in Eastern Europe were rounded up by the German military, shot and buried in countless mass graves.

Germany has recently been recognized for its solidarity with Israel and support of Jewish interests. German Chancellor Angela Merkel received the 'Light Unto the Nations' award on Thursday from the AJC for her "outspoken support for the Jewish people."

German Chancellor Angela Merkel has been honored by the American Jewish Committee for her "outspoken support" of the Jewish people and Israel. She was given the Light Unto the Nations award on Thursday. (20.01.2011)

The Simon Wiesenthal Center has awarded Germany a top grade for its efforts to prosecute Nazi war criminals. The number of ongoing investigations into former Nazis has increased both in Germany and elsewhere. (13.01.2011)