She is the first woman to have won the renowned literary prize since 2013 and the first award winner from Northern Ireland. Her novel Milkman explores sectarian violence that plagued the region for 30 years. 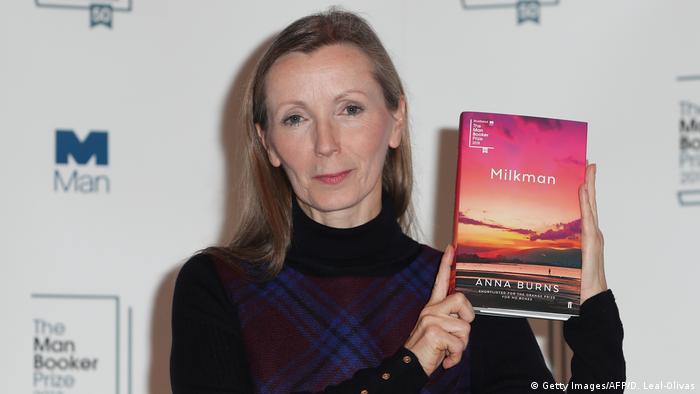 The story, which judges honored as "utterly distinctive," explores the 30 years of Catholic-Protestant violence in Northern Ireland from 1968 to 1998, known as "The Troubles."

"None of us has ever read anything like this before," Kwame Anthony Appiah, chair of the 2018 judges, said as he announced Burns' name.

Born in Belfast in 1962, Burns grew up in a deeply divided region at the height of the sectarian conflict. She left for university in England and has remained there ever since.

Milkman follows a bookish 18-year-old woman who is pressurized by an older, more powerful man who uses family ties, social pressure and political loyalties as weapons of sexual coercion and harassment. The character is also tormented by the vicious tongues of her neighbors.

Set in the 1970s, the novel was published amid the global eruption of sexual misconduct allegations sparked by the #Metoo movement.

The 56-year-old said the idea of Milkman came to her in the image of a teenage girl walking down a street in a divided city while reading Ivanhoe, a British historical novel set in the 12th century.

Burns said she was "stunned" at receiving the Man Booker Prize, Britain's most prestigious literary award, having heard that the judges decision was unanimous.

She is the author of two previous novels, No Bones and Little Constructions, and the novella Mostly Hero.

The novel was one of six in the running for the 50,000-pound (€57,000, $66,000) prize. Other shortlisted works included The Overstory by American author Richard Powers and Washington Black by Canadian writer Esi Edugyan.

Launched in 1969, the Man Booker Prize was only open to novelists from Commonwealth states until 2014, when all restrictions were removed. Burns is the first Briton to win the prize since the change.

Past haunts Northern Ireland 20 years after the 'troubles'

The Good Friday Agreement brought an end to Northern Ireland's "troubles." But the deal failed to offer a blueprint for dealing with a past that casts a shadow over the present, reports Peter Geoghegan from Belfast. (09.04.2018)

Historical fiction takes the spotlight in the six titles selected out of 165 entries this year. Here are the books vying for the top prize. (11.09.2018)

American George Saunders has earned one of the world's most prestigious English-language literary awards. His novel "Lincoln in the Bardo" about restless souls in the afterlife was praised for its "innovation." (17.10.2017)