Angola's president set to be returned to power

Elections got underway in Angola on Friday which observers say will keep President Jose Eduardo dos Santos in power. Formal opposition may be weak, but he faces pressure to redistribute the nation's wealth. 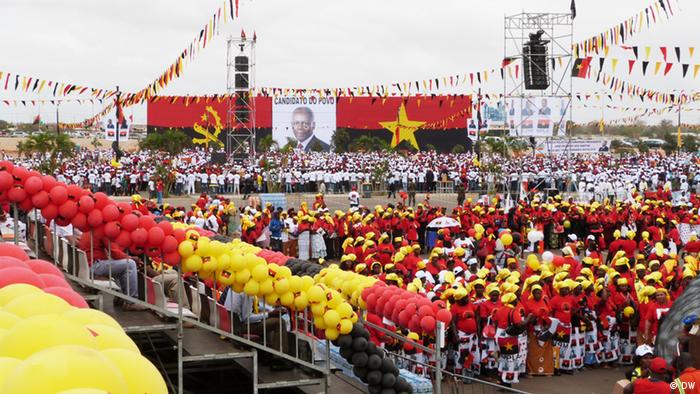 The campaign in Angola was an unequal battle between the MPLA (Popular Movement for the Liberation of Angola) and eight opposition parties.

President Jose Eduardo dos Santos has led Angola since the country gained independence from Portugal three decades ago, and is also widely expected to win the 31 August election. 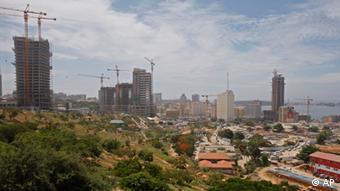 The only authoritarian leader who has been in power longer than dos Santos is Equatorial Guinea's Teodoro Obiang Nguema.

Dos Santos exuded self-confidence as the campaign wound up.

"The reconstruction of our country is in full swing. We have contributed significantly to the improvement of the living conditions of the Angolan people. The opposition can only criticize and threaten but the MPLA works for the good of the Angolan citizens," dos Santos said at a campaign rally.

A 2011 study by the prestigious American Gallup Institute ranked dos Santos as the most unpopular political leader in Africa.

Nevertheless it appears that an MPLA victory is inevitable when the party's power and influence is compared with that of the opposition, led by the former rebel movement UNITA.

Opposition leaders like UNITA's Isaias Samakuva and others have never been able to match the charisma of the historic UNITA leader Jonas Savimbi.

Rights groups like Global Witness and Human Rights Watch have levelled a barrage of criticism against dos Santos and his ruling MPLA for failing to share the country's oil riches more equally among Angola's 18 million people. 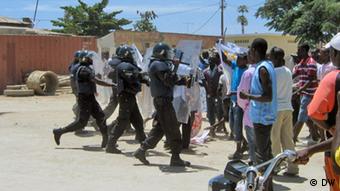 Security agencies are accused of cracking down on the opposition

Angolan journalist, blogger and human rights activist Rafael Marques criticises the MPLA's use of public funds for its own campaign and its crackdown on the opposition.

"What we are witnessing here in Angola is an electoral process that wants to keep the current regime in power. It is a highly corrupt system," Marques said. "No Angolan who is reasonably sane believes that these elections will be fair and legal."

"In 2008 there was a monitoring mission from the European Union. They had long term observers, who were stationed in all provinces of the country," HRW researcher Lisa Rimli told DW.

"This time round there are fewer election observers - and they have been unable to get accreditation." she added, saying there is a climate of intimidation and freedom of assembly is restricted.

UNITA, the largest of the eight opposition parties, called for a mass demonstration for fair elections. Its leader Isaias Samakuva accused the National Electoral Commission, which is dominated by the MPLA, of irregularities. 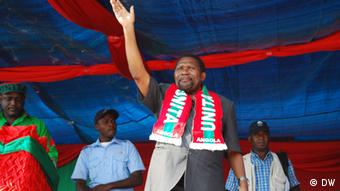 "We are listening to the people in every corner of the country, saying there is much suffering and that they want change," Samakuva told supporters at a rally in the capital, Luanda.

"We called for the postponement of the elections. It's better to wait a month until everything complies with legal requirements. But this did not happen," he said.

But, while major investments in construction and infrastructure have covered many of the scars of war, critics and ordinary Angolans say widespread poverty and inequality are festering, unhealed sores. 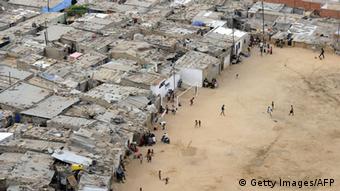 Unequal distribution of wealth has led to increased poverty in the country.

In all probability Eduardo dos Santos will be confirmed in office. A constitutional amendment in 2010 abolished direct presidential elections. The position of president now goes to the candidate who heads the list of the party which wins the most votes. And that will be the MPLA.

No "Angolan Spring" before the elections.

National elections will be held in Angola at the end of the month. The polls are expected to end in victory for the ruling MPLA party, though they are tentative signs of a "Angolan Spring." (28.08.2012)

Angola cracks down on anti-government activists

The Arab revolutions have inspired protesters and human rights advocates in other African nations. In oil-rich Angola, activists have repeatedly taken to the streets to demonstrate. But the authorities are cracking down. (14.09.2011)

Frustration over poverty and unemployment had given the main opposition party its best-ever chance of winning the vote in a country that has been ruled by the MPLA party since independence almost 50 years ago.

President Joao Lourenco's MPLA is poised to continue its nearly five-decade rule after scoring 51% of the vote in Angola's most fiercely fought poll. But opposition party UNITA is contesting the count.