Andamans and Nicobars Are a Tourist Paradise | Asia| An in-depth look at news from across the continent | DW | 24.12.2009

Andamans and Nicobars Are a Tourist Paradise

They are perhaps one of the last spots of paradise on earth -- some 500 islands in the Bay of Bengal, strewn over an expanse of 700 kilometres. The islands were particularly badly hit by the tsunami in 2004 and some 6,000 people lost their lives. Some inhabitants want to promote tourism to the islands but environmentalists fear this could have disastrous consequences for the tribes who still live there isolated from the rest of the world. 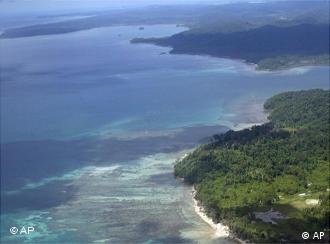 A coral reef in India's Andaman and Nicobar islands

Crystal clear water reflecting the thousand colours of the sun. A white sandy beach. Palm trees blowing in the wind. Radhanagar Beach on Havelock Island is surely one of the most beautiful beaches in the world and the best thing is that there are hardly any tourists.

Those who have found the place are enchanted. 25-year-old Carsten Schiller from Hamburg thinks that "the Andamans are the most beautiful place in India for relaxing and enjoying the sun."

"The most important thing here is the diving," says a Finnish tourist. "The islands are a bit out of the way and therefore there aren’t so many tourists. Everything is still and calm here."

Islands need to be promoted for tourism

The former head of the Andaman and Nicobar chamber of trade and commerce, Mohammad Jadwed, thinks that the potential for tourism has to be exploited. He owns a fleet of ships that he uses to transport tourists to the islands.

"I think that the tsunami is one of the most terrible historical events to ever hit the islands,” he says. "And yet the catastrophe also had a positive effect. Before, the Andaman and Nicobar islands were not to be found on any map of the world. Even many Indians didn’t know where they were. But since the tsunami people have been aware of us. We have to make the most of this fact."

Tourism to the islands grew steadily until 2004. Some 150,000 tourists would come from the Indian mainland and abroad. There were plans to build big luxury hotels. But then the tsunami struck.

Now the Taj hotel chain is planning to build a massive resort. And the government is reviewing a hundred million euro investment plan that includes the islands. The number of flights from the Indian mainland has already doubled. There is also talk of opening the provincial capital Port Blair’s airport to international flights.

Environmentalist Samir Acharya thinks this would be disastrous for the tribes who live on the islands. "Of course we need tourism on these islands," he says. "But to misuse tourism is wrong. And all this talk of eco-tourism is just fashionable. Today there is a lot of greenwashing."

Samir Acharya is not only worried about the region’s biodiversity. He also wants to know who the tourist boom is supposed to help. The Indian settlers or the indigenous population?

He thinks that the Jarawas, who live on a reserve, are particularly at threat.

Shyami Sodhi, who is in charge of the well-being of the tribes on the islands of Andaman and Nicobar, worries that the Jarawas could lose their traditions. "They live next to a big road. Their lifestyle and their culture are coming into contact with our lifestyle and our culture more and more. We’re getting closer to another. We have to be careful."

Six years ago, India’s Supreme Court ruled that the road should be closed down but this has not happened. There are rumours that some tourists pay a lot of money to visit the Jarawas.

They exchange photos for a biscuit or some other item of food that the Jarawas do not know. At the moment, these are only isolated incidents but observers worry that this paradise on earth could well disappear over the next few years.