Researchers say they have evidence that most of the gold floating around world markets and jewelry stores today was carried to Earth billions of years ago by meteorites, long after the planet's formation. 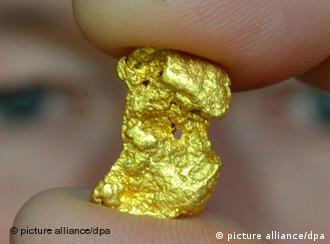 The theory explains why so much gold is near the surface

Scientists have released a series of spectacular findings showing that most of the gold in the Earth's crust and mantle in fact came from outer space.

This shiny metal has long attracted the fascination - and sometimes obsession - of mankind. The substance has not only raised and ruined civilizations, but it played a key role during the Earth's fiery, tumultuous formation.

As the Earth cooled, liquefied gold and platinum settled to the plant's center, forming a major part of the core.

"We calculated that if you took out all the precious metals from the core of the Earth and coated the Earth with these precious metals, you could basically bury the Earth under a four-meter-think layer of precious metals," researcher Matthias Willbold, who led the study team from the University of Bristol in Britain, told Deutsche Welle.

Scientists have always wondered, however, why such large amounts of gold remain in the Earth's outer layers - thousands of times more than there should be.

The prime theory had always been that much of that surface gold came from outer space, but now the Bristol researchers say they have evidence to back up the theory.

For their study, Willbold's team set about analyzing ancient rocks in Greenland. "The rocks you can find there are basically the oldest rocks that you can find on Earth. These are about 3.8 billion years old," said Willbold, adding that the formation of these rocks was thought to predate the arrival of gold-carrying meteorites.

Willbold's team analyzed the trace mineral zircon in the Greenland rocks to determine their makeup.

"We hoped that by analyzing these rocks we could get an idea of how the Earth looked before that meteoritic bombardment, so we can estimate how much meteoritic material was added to the Earth," he said.

The work done by Willbold's team showed that most of the precious metals on which Earth's economies and many key industrial processes are based were delivered to the planet by luck. According to the study, some 20 billion tons of asteroidal material struck the planet once the Earth cooled - hence the presence of gold in the crust and mantle.

A recently-published paper by Japanese researchers reporting vast deposits of rare earth elements in the Pacific has made headlines across the world. In Germany, the news is being met with skepticism. (05.07.2011)

In times of financial uncertainty, the precious metal has always been considered a safe bet. This is especially true in India, where half of the world's gold can be found. (02.02.2011)

China has experienced an unprecedented gold rush in the past few months, as the government hastens to turn currency reserves into gold and encourages its citizens to buy up the precious metal. (10.01.2011)