Anarchists from across the Balkans clash with Greek police

"Anarchist autonomists" have clashed with riot police in the northern Greek city of Thessaloniki. The protesters came from across the Balkans and were marching to protest nationalist attacks. 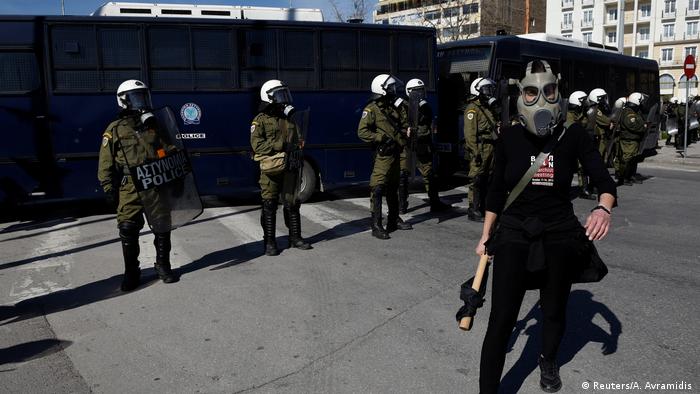 Greek police threw stun grenades and fired tear gas at protesters on Saturday, as they marched in the northern port city of Thessaloniki.

Police said tear gas was fired only after demo participants began throwing stones and bottles at the police. Riot police then set in to break up the demonstrators with truncheons and tear gas.

The gathering took place in response to recent attacks by nationalists on anarchists, including the burning down of an anarchist collective's premises by far-right protesters during a rally in January. Other attacks on anarchist residences have also been reported in recent weeks.

Protesters were reported to have come from across the Balkans, joining like-minded locals for the rally.

Anarchist autonomism emerged as a movement after the Athens Polytechnic uprising of 1973, and has a long tradition of conflict with the police. It embraces an ideology of anarchy along with the idea of tackling issues such as workers' rights at a local level, although it is a very loose and diverse political group.

As the protests took place, The Associated Press reported that anarchists had barricaded themselves in at the University of Thessaloniki campus, which police are barred from entering.