A new eco-city is being built in Mongolia. Designed by German city planners and complying to strict environmental standards, Maidar City is to become the new political and religious center of the country. 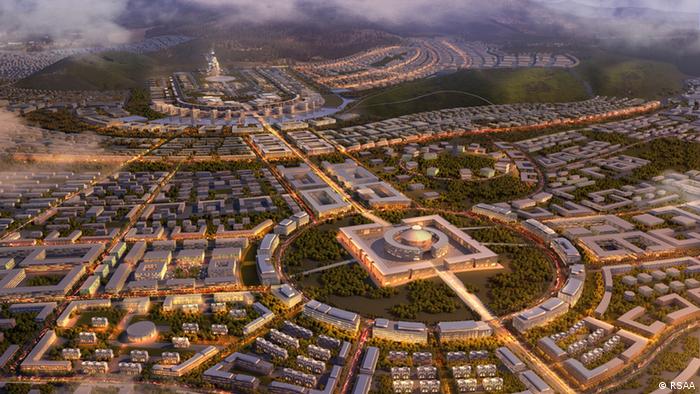 For Stefan Schmitz, it is something like the project of his life. The Germany-based architect, together with other urban planners, is designing a model eco-city - in the middle of the Mongolian steppe.

Although not much construction has taken place so far, the plan foresees the building of a new urban center - Maidar City - in this location that houses 300,000 inhabitants. It will also have its own university, museums and religious centers, along with areas dedicated for tourism and film industries.

The city had been originally planned for only 20,000 people, but it gradually became a construction project of national significance as the situation in Ulan Bator - which lies just 30 kilometers away - turned precarious. 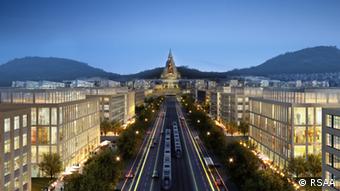 Mongolia is the country with the lowest population density in the world. The landlocked Asian nation tucked between China and Russia has an area that is four and a half times the size of Germany, but has a population of just over three million people. Yet, the country faces all kinds of urban problems such as housing shortages, overcrowding and traffic jams.

This is because a huge proportion of the nation's population is concentrated in the capital, as many Mongolians see low economic prospects elsewhere in the country.

"Ulan Bator was actually built for 600,000 inhabitants, but now more than 1.2 million live there," said the city planner Schmitz. "Real estate prices in the city are sky-rocketing, higher than in Europe," he added, stressing that a Mongol with an average income cannot afford to live in Ulan Bator. The city's population growth is mainly due to the migration of nomads, who raise yurts around the city.

"Nomads can freely choose where they set up their yurts. So whoever finds work in the city looks to raise a yurt near by. And raw coal is used for heating in these yurts, thus causing smoke and air pollution," Schmitz told DW. The problems, however, are not limited to pollution as the city's infrastructure, water and power supplies are now completely overwhelmed by the influx of nomads, the city planner explained. 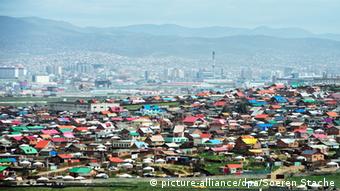 This is why Mongolia is planning Maidar City as an ecological urban development project with the help of Stefan Schmitz. The city, which is to draw most of its energy from renewable sources, will follow ecological principles and feature an independent drinking water supply as well as an environmentally-friendly and decentralized traffic and living concepts.

For instance, the rain water coming down from the surrounding hills will be collected, cleaned and then channeled as drinking water onto a lake which will also serve as a local recreational area, said Schmitz.

The urban planner told DW that Mongolia offers very good conditions for generating renewable energy. "There is a lot of wind in this area and the sun shines almost continuously during the winter." A nearby wind farm is set to be expanded in order to meet the electricity needs of Maidar City.

An artist's impression of desertification in Mongolia

A Mongolian government study suggest a quarter of the country has become desert over the past three decades. Paris-based artist Daesung Lee uses art to highlight a problem threatening the traditional nomadic way of life (19.02.2015)

No words allowed - how was Ulan Bator, Carolina?

Filming in freezing cold and heavy smog - reporter Carolina shares her experiences from shooting in Ulan Bator, Mongolia. But in silence - no words allowed. (19.02.2015)

And to the south of the city, land is already reserved for sustainable agriculture. This is to supply the city with food, and also aimed at halting the increasing desertification in the region. The city's districts are planned in such a way that they exist independently of each other, with their own centers, noted Schmitz, pointing out that "public transport and electric cars will be a priority."

The architecture firm RSAA, where Schmitz works, has years of experience in China and Mongolia. More than ten years ago, the company won the bidding for planning the construction of China's Tianjin Eco-City. "This really gave us a boost in Asia," said Schmitz. "More than half of our projects are now linked to Asia."

Maidar City is just one of several projects planned by RSAA in Mongolia. Now that the city's design has been finished on the drafting board, it's time to realize the project.

So far, only the lower half of a Buddha statue is all that stands. But once completed, the statue is set to soar 54 meters (177 feet) into the sky and symbolize the city's religious and political center. The first stage of construction for an estimated 90,000 people is set to be ready by 2030, although Schmitz warns that many factors may impact the schedule.

Once a month, the architect flies to Mongolia to promote his project, make arrangements and keep an eye on building works. "There is good communication with the Mongolians. They are calm, serene, and very clear discussion partners," said the architect, adding that it was great fun to take part in such pioneering work.

Schmitz pointed out, however, that while all Mongolian ministries have been open-minded to the idea of the new eco-city, the country remains largely dependent on foreign funds and consultants for its realization. 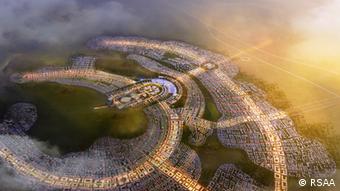 The first stage of Maidar City's construction for an estimated 90,000 people is set to be ready by 2030

"Many investors, particularly from China, are interested in taking part in this project," he said, adding that he supports the idea of selling single parcels of land to investors from around the world. The architect emphasized in this context that what's key for Mongolian authorities is that they remain in control.

Moreover, every investor has to meet strict requirements to allow the project to keep the label of eco-city. "There are no such things as development or land-use plans in Mongolia," Schmitz explained.

This is why requirements and restrictions have to be stipulated in every single purchase agreement. "The key is to find a balance which allows us to both meet the ecological requirements of the city and keep investors happy."