Amid war in Ukraine, are Estonia′s Russian speakers ready to embrace the West? | Europe | News and current affairs from around the continent | DW | 11.03.2022

Amid war in Ukraine, are Estonia's Russian speakers ready to embrace the West?

Russia's attack on Ukraine is putting Russian speakers in Estonia under pressure to decide which side of history they are on. The Estonian government is under pressure to help them feel more at home in the Baltic state. The room filled with curiosity when a resident in Narva, on the Russian border, confronted Estonia's defense minister with fears of Russia "needing to rescue its own compatriots." For some onlookers, it signaled an easing of the complex ties between Russian and Estonian speakers in Estonia.

Defense Minister Kalle Laanet came to "Estonia's Russia" for the town-hall-style meeting on Monday to address residents' concerns in the wake of the war launched by their neighbor. Would there be shelters in case of bombing? How could friction between Ukrainian refugees and local Russians be prevented?

"We have 70,000 gray passports in Estonia, we have 80,000 Russian citizens in Estonia," Narva native Margarita Källo told Laanet at Tartu University's Narva College. "I see it as a big problem, first of all for Estonia, for our security."

After the Soviet occupation, the Estonian government took a hard line toward residents seen as having been imported by the USSR to work in the Baltic nation's industries — and decided to require knowledge of the Estonian language to obtain Estonian citizenship. Many never managed, or preferred to keep the travel flexibility that stateless status offered them. The issue has been emotional, and controversial for years. Roughly a fourth of Estonia's population of 1.3 million are Russian speakers.

Ten days after Vladimir Putin's Russia launched its war on Ukraine, a cautious Defense Minister Laanet stressed the importance of keeping all of Estonia's residents united regardless of their language or ethnicity, adding that the war in Ukraine could justify "looking at the issue differently." 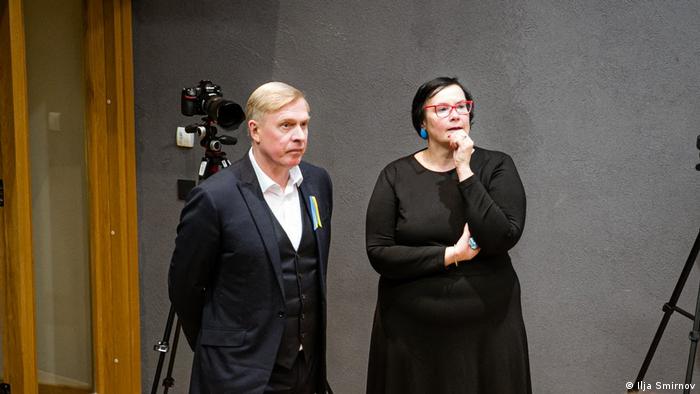 Simmering mistrust between Estonian and Russian speakers has played out in Narva for a long time. This is shaped by the wounds the Soviet occupation inflicted on Estonians, the cataclysm the country's independence represented for Russian speakers, and decades of omnipresent Russian media.

In the third-largest city in Estonia, many in Narva have tended to look closer to their near neighbor to the east than to the Estonian capital — though residents don't want to return to Russia, either.

Until recently, close to 3,000 people walked or drove across the "friendship bridge" linking Narva with its Russian sister city, Ivangorod, daily. The bridge hosts friends and relatives visiting or heading to St. Petersburg, and Russian trucks bringing merchandise to Narva's industrial park. Russian propaganda also just as easily filters back into Narva on the airwaves. 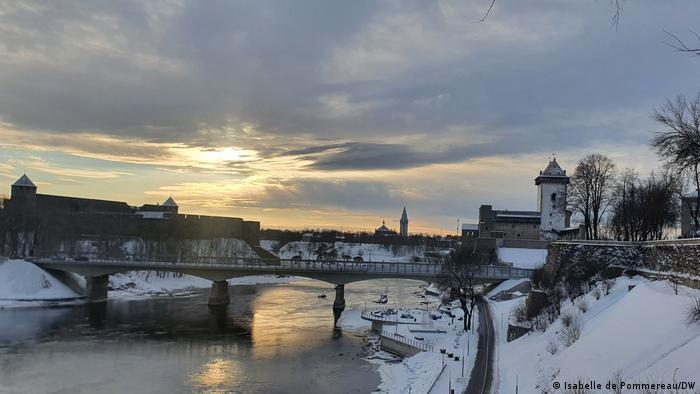 To the right, Narva Castle in Estonia. To the left, Russia's Ivangorod Fortress. The Narva River separates the two countries

The war in Ukraine has not only reduced traffic to a trickle of cars and buses filled with Russians fleeing their country and Ukrainians the war — but also prodded deep changes in some Russian speakers' perceptions toward Estonia, says Dmitri Teperik, chief executive of the International Center for Defence and Security (ICDS) in Tallinn, Estonia's capital.

Teperik has been monitoring the behavior of Estonia's Russian speakers on social media since February 24. In Narva, he says, a "small, but real group of pro-Putin residents with toxic views" is coexisting with a large group of residents who are largely indifferent to the current events.

But the war has been the catalyst for a new group of ethnic Russians to publicly assert their pro-Ukraine and pro-Western European identities. "Russian speakers who support Ukraine have gained visibility," says Teperik. "They have gained more courage."

"This is important," he adds, because it is not only about Ukraine but about an "important shift in values of freedom, democracy versus supporting autocracy."

'We are not afraid,' says Estonian PM Kaja Kallas

Sergei Stepanov, a former longtime editor of the Russian Narvskaya Gazeta who now works for Estonia's Russian language public radio in Narva, says Monday's public discussion on "gray passports"  was important and the turnout a welcome sign that "people want to get the information from the real sources, not from Russian TV propaganda."

Margarita Kallo feels the "stateless" status of so many Russian speakers in Estonia makes people feel unwelcome — and that they could be pushed toward a "Russian Federation state of mind and propaganda because they felt they are not welcome in Estonia."

"I believe this is one of the reasons why, in Narva, there are confused feelings."

The issue is controversial: Others feel that Russia is using the "gray" passport issue as a tool to divide Estonia's various ethnic groups.

In 1944, the Soviet army pushed the German Nazis out. The Soviet "victory" for Estonians heralded a dark chapter of Soviet occupation. Narva's Estonians were displaced — many perished in Siberian labor camps — and replaced by workers from other Soviet satellite states.  With independence, Russian speakers lost their identity. While Estonia turned West, some in Narva remained tuned to Moscow.

In 2014, many Narva residents backed the Kremlin's move to annex Crimea and defend "its people" in Donbas. 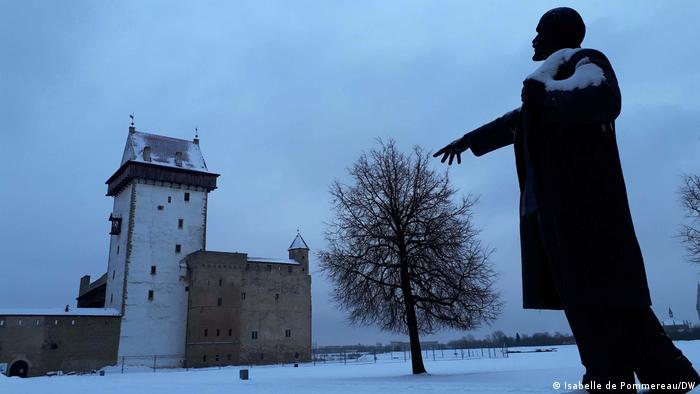 Reportedly the last public statue of Lenin in Estonia still stands, in Narva, close to where residents celebrate the Nazi defeat on May 9

In Narva, few Ukrainian flags decorate the streets as in Tallinn. While 30,000 Estonians swarmed the capital's Freedom Square in an anti-war rally, Narva residents largely stayed home. "People keep quiet, they are afraid," Roman Vikulov, a local reporter for a Russian-language weekly, says. "There is not much room for discussion here."

Aleksandr Hobotov, who works in Narva, says the war in Ukraine has broken the "wall glass" between Estonian and Russian speakers.

"Eight years ago, it was clear that one part of society had one opinion and Russian speakers had another opinion, Russian speakers were pro-Russia, pro-Putin, and Estonian-speaking Estonians were pro-Ukraine. Today, everybody understands that it is not Russia's war but it is Putin's war."

Hobotov's wife is Russian and her family, who live in Siberia, are scared to speak out against the war amid the Kremlin's crackdown on dissent.

"Russian speakers have lots of relationships with Russia, for everyone it's a big struggle," says Hobotov. "Families are torn." 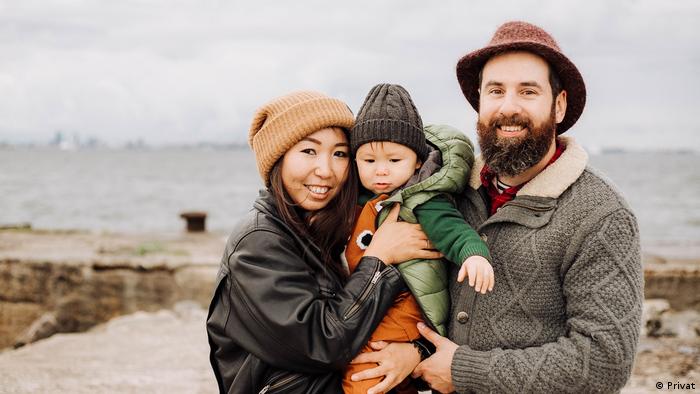 Aleksandr Hobotov stands with his wife, who is Russian, and their child in Tallinn, Estonia

The war has encouraged some Narva residents to take a step unthinkable only years ago: joining Estonia's booming volunteer defense force. The force, known as Kaitseliit, consists of an estimated 15,000 people trained for combat, including cyber-specialists, who stand ready to report to the Estonian Defense Forces should a national crisis occur.

With a tiny standing army of 3,000 members, and given Estonia's recent history of occupation, the volunteer force testifies to Estonia's "whole society" approach to defense.

Aleksandr Pavlov, who joined the league in 1996, says some of his friends have been admirers of Putin — but he's since noticed a shift following the war in Ukraine. "After the invasion, they changed their views. A world is gone," says Pavlov.

After visiting many countries, Russian speaker Ivan Dmitrijev says he joined the force, citing his pride in Estonia as the impetus. "I feel that Estonia is the best," says the 20-year old student, one of a growing number of Russian speakers who have joined Narva's 300-strong league in recent years.

Dmitrijev is used to navigating between Russian and Estonian cultures, but the Narva bridge reminds him of where he wants to be: "There is a bridge, and 200 meters away there is Russia," where, he says, roads are pot-holed, buildings dilapidated, store shelves empty.

"Nobody's waiting for you there."

Can people in Russia still get uncensored information about the war? DW's Konstantin Eggert