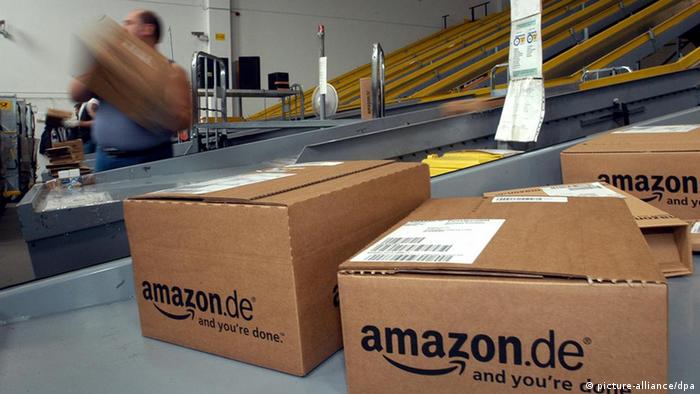 "The allegations that were broadcast are very serious and affected me greatly," head of the Hesse branch of the Federal Employment Agency, Frank Martin, said in a statement. Martin called on Amazon to clear up the "currently non-transparent working practices" as quickly as possible.

A public television documentary on ARD, whose title roughly translated as "shipped out!", looked into working conditions for seasonal staff - mostly from outside Germany - brought in to deal with the Christmas rush at Amazon's German outlets.

The half-hour investigative program explored tiny temporary accommodation, unreliable bus transportation to and from Amazon offices, temporary and unsecured contracts, as well as the last-minute outsourcing of work contracts to employment agencies - reportedly paying less than the wages advertised on the original job application.

It also displayed a heavy presence of security staff from a company called H.E.S.S (Hensel European Security Services), with the program questioning a possible allusion to Adolf Hitler's deputy, Rudolf Hess. The security firm was contracted by an employment agency, not Amazon directly.

The program featured Amazon distribution centers in Augsburg, Bavaria, the western town of Koblenz and most prominently, Bad Hersfeld in Hesse.

Taxing multinationals - Where should they pay?

Where should multinational companies pay their taxes? Starbucks Coffee has just announced it will pay 20 million pounds over two years to Britain, but is this correct? And can a more international agreement be found? (07.12.2012)

"The living and working conditions of Spanish seasonal workers portrayed in the television documentary damage Germany's reputation deeply," Martin said, also saying he was concerned that the state's chances of securing qualified staff would suffer "if such examples were to become more common."

Amazon recorded sales of 6.8 billion euros ($8.4 billion) in Germany in 2012, making it the company's second-largest market after the United States. The company is Germany's leading e-commerce business with an online market share just below 25 percent.

Many Germans called for boycotts or protests after the broadcast. A petition endorsed by the Verdi trade union, responsible for those Amazon staff seeking union representation, had garnered more than 3,000 signatures as of the early hours of Saturday morning.

In Augsburg, Verdi announced that a long sought-after staff council for Amazon's logistics center at Graben was voted in on Friday. "This was more than overdue and is a large step towards an improvement of the working conditions at Amazon," Verdi's Thomas Gürlebeck said, adding that the documentary had given the motion a boost.

Augsburg's staff council elections were mentioned in the ARD show, with a local pastor spearheading the initiative one of the few people willing to be interviewed without using a pseudonym or disguising their voice.

"The staff council and we will take Amazon at its word, and seek progress towards improved working conditions," Verdi's Gürlebeck said.

Amazon released a statement earlier in the week saying it was standard for a seasonal business to employ people temporarily, also pledging to look into allegations of random searches by H.E.S.S security staff.

"Even though the security firm was not hired by Amazon, we are now obviously checking the allegation by the journalists regarding the behavior of security personnel and will swiftly implement appropriate measures," the Amazon statement said, adding the company tolerated "no form of discrimination or intimidation."