Alliance of Civilizations Kicks Off in Madrid | Europe| News and current affairs from around the continent | DW | 15.01.2008

Alliance of Civilizations Kicks Off in Madrid

A controversial new UN forum opened in Madrid Tuesday designed to avert what has become known as the clash of civilizations, in the wake of Sept. 11 and the Madrid train bombings that killed 191 people. 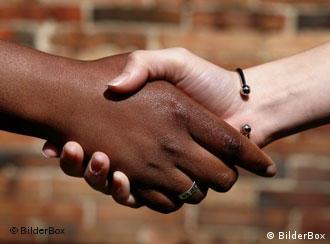 Will the forum bring people closer together?

The Alliance of Civilizations is the brainchild of the Spanish Prime Minister Jose Luis Rodriguez Zapatero, who launched it four years ago together with his Turkish counterpart, Recep Tayyip Erdogan, to tackle intolerance and promote understanding, dialogue and reconciliation between world cultures. In 2005, it was adopted by the UN and now has the backing of more than 80 nations.

The first Alliance of Civilizations Forum taking place this week aims to "mobilize those great majorities of the population who want to, and know how to, live in peace," said the Spanish premier in his inaugural address. "It wants to contribute to isolating extremist and intolerant discourses on the part of those who try to utilize religion or culture for political purposes."

The forum seeks to "avoid the predicted clash of civilizations, by promoting security, understanding, tolerance, and mutual respect in a globalized world," he said. 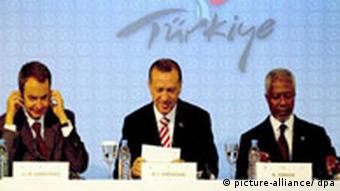 Zapatero, Erdogan and Annan at the forum

"The international situation created in the wake of Sept. 11, as well as all the other terrorist attacks that have tragically marked our times, have created a pressing need for dialogue between civilizations, religions and cultures," Sampaio told the delegates.

They will spend the event discussing ways to solve ethnic, religious and national conflicts, and attending seminars tackling issues such as education, the role of mass media and possibilities of conflict prevention.

Among the initiatives to be announced at the two-day gathering will be the launch of a multi-million dollar media fund, to be run independently of the UN and set up by private philanthropists and media agencies. The fund is to finance major film productions that help to promote cross-cultural understanding and combat stereotypes.

Another project expected to be announced is a Rapid Response Media Mechanism, aimed at reducing tensions in times of cross-cultural crises, such as the publication of cartoons of the Prophet Mohammad in a Danish newspaper in 2005 that led to violent demonstrations throughout the Muslim world, and the Holocaust conference in Iran last year.

The Alliance will also promote a special fund for cross-cultural cooperation between youth organizations. 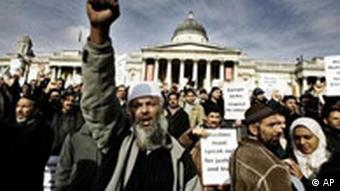 However worthy its goals, the plan has not met with wholehearted approval. Its detractors dismiss the project as so much hot air and accuse the Spanish government of financing the event with its domestic budget, which allegedly costs as much as an EU summit.

Other critics claim the Alliance of Civilizations is peddling ineffective strategies, restricting its focus to the rift between the West and the Muslim world and creating cultural divisions by defining people solely by their religion.

Many European papers strongly criticized US President Bush's response to Sept. 11, accusing it of bungling its "war on terror" and squandering global goodwill by invading Iraq. (11.09.2006)

Uprooting Terrorism in Spain After Sept. 11

In view of the advance of international Islamic terrorists, Basque terrorist organization ETA had to revise its violent strategies in Spain. The Madrid bombings sealed this process in 2004. (07.09.2006)

"I Want to Play a Harmonizer's Role"

United Nations Secretary General Ban Ki-moon spoke to Deutsche Welle about his plans for the global body, Germany's role in the UN and the current conflict over Iran's nuclear program. (06.03.2007)