Germany's Alexander Zverev missed the chance to book his place in the semi-finals of the season-ending ATP World Tour Finals in London. Zverev lost in straight sets to Greek debutant Stefanos Tsitsipas. 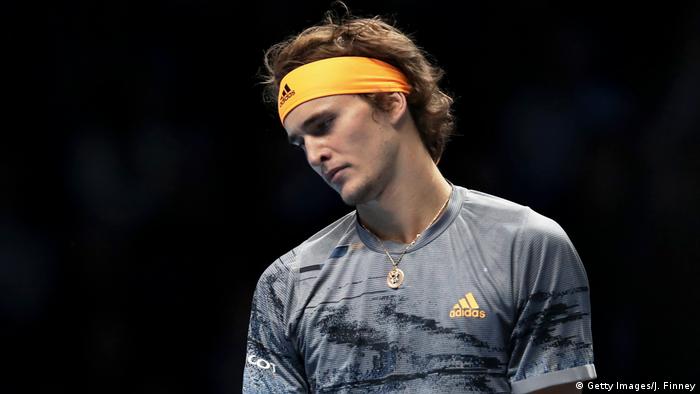 Alexander Zverev suffered a comprehensive defeat by debutant Stefanos Tsitsipas, who crushed the defending champion 6-3 6-1 to take his place in the last four at Zverev's expense — but the German can still qualify.

The 21-year-old, the first Greek player to qualify for the elite eight-man season-ender, backed up his opening win over Daniil Medvedev with a virtuoso performance at the O2 Arena.

His straight-sets victory secured a top-two place in the group and left Zverev, world number one Rafael Nadal and Medvedev scrapping to join him in Saturday's semi-finals.

The evening clash was the youngest, in terms of combined age, at the ATP Finals since Andy Murray played Juan Martin del Potro in 2009, but produced a performance of maturity and sustained quality by Tsitsipas to leave Zverev, 22, in his wake.

Zverev defeated 19-times Grand Slam champion Nadalin his opening match on Monday, having beaten Roger Federer and Novak Djokovic back-to-back to win last year's title, but he had no answer to the all-court game of Tsitsipas.

The Greek broke in the eighth game when Zverev opted to serve and volley on a second serve but made a mess of a low volley and from that point on it was one-way traffic.

Zverev's leveltailed off alarmingly in the second set and Tsitsipas wrapped things up with an ace.