Albania's parliament has approved a judicial reform aimed at battling organized crime and corruption. The reform is seen as a major step in the nation's journey toward European Union membership. 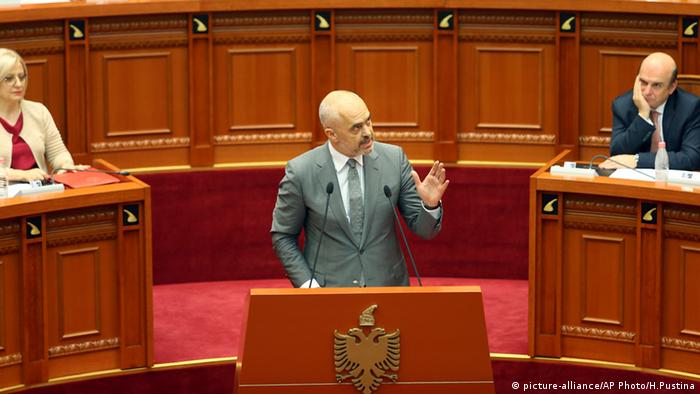 The ruling and opposition parties in Albania adopted a package of judicial reforms on Friday, meeting a European Union condition for starting membership talks with the Balkan state.

Prime Minister Edi Rama (pictured above) said in an address to parliament that the "reform will pave the way to a real revolution in the judiciary."

All 140 lawmakers in Albania's parliament voted in favor of the constitutional package which had been blocked for months by the opposition Democrats party. They were against a clause which allowed foreigners to approve magistrates.

The EU praised the vote, saying the reform would give Albanian citizens an "accountable, independent and transparent" judiciary which will help fight organized crime and corruption.

"These are all key priorities for Albania on its path toward integration into the EU", the EU's Albania office said in a statement.

Judges and prosecutors will now be appointed based on merit through a third-party body comprised of international experts in an attempt to secure political independence. Candidates for the judiciary must then be approved by a two-thirds majority in parliament.

The changes will also seek to root out bribery by checking the incomes and property holdings of prosecutors and judges.

The vote came after 18 months of contentious negotiations between the two parties mediated by EU and US experts.

A political agreement with the opposition was eventually reached after international pressure from Brussels and Washington, as well as a threat to revoke the nation's EU candidate status by the chairman of the German parliament's EU Affairs Committee, Gunther Krichbaum.

NATO member Albania became a candidate to join the EU in June 2014, but has been under pressure from Brussels to do more to tackle crime and corruption as well as human and property rights.

However, the EU has made reforming the judiciary in Albania a top priority.

The Balkan country's government hopes to start negotiations on EU membership by the end of this year.

Kristina and Luka are hoping for the virtually impossible - to be granted asylum in Germany despite being Albanian. They didn’t leave the Balkan country just for material reasons. (04.01.2016)