Journalists from Qatar-based news channel Al-Jazeera have gone on trial in Cairo, shouting in court their detention conditions were "psychologically unbearable." The trial has been adjourned until March 5. 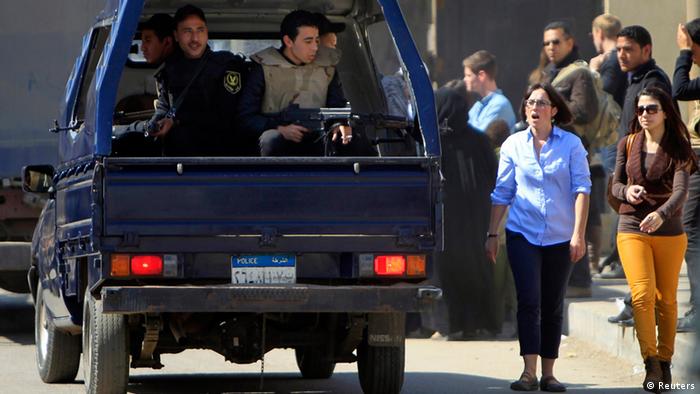 Al-Jazeera journalists were put on trial before an Egyptian court on Thursday, mostly in absentia. Human Rights Watch said the case was part of crackdown on dissent by Egypt's interim military-installed government.

Egyptian prosecutors allege that the reporters manipulated footage in support of the now-banned Muslim Brotherhood.

Those detained and facing trial include the Australian Peter Greste and Egyptian-Canadian Mohamed Fadel Fahmy, who were arrested in December in a Cairo hotel. The pair shouted to reporters on Thursday as their trial began, that they are experiencing "psychologically unbearable" conditions while being held.

"It's physically fine, but psychologically unbearable," Fahmy said. "We are strong," he told reporters in the makeshift courtroom set up at a police academy south of Cairo.

After the trial opened, the court announced that it would wait until the next hearing to listen to prosecution witnesses and consider the evidence. The trial was adjourned until March 5, after a 40 minute hearing.

In all, 20 persons are charged, including foreign journalists outside Egypt. Al-Jazeera said only nine of the defendants are on its staff. It has denied the charges that the journalists helped a "terrorist organization."

Prosecutors claim that they falsely portrayed Egypt as being in a state of "civil war" when the channel covered a crackdown last July when more than 1,000 supporters of deposed Islamist president Mohamed Morsi were killed in street clashes.

The trial reflects strained relations between Egypt and Qatar, which had backed Morsi.

When Egypt's prosecutor general last month charged 16 Egyptian and four foreign Al Jazeera journalists with broadcasting false news and colluding with a terrorist group, Rena Netjes thought she had nothing to fear. (19.02.2014)

Among those arrested and prosecuted had been journalists, demonstrators and academics for "peacefully expressing their views."

The International Press Institute on Wednesday urged the Cairo court to release the detained journalists.

Greste himself, writing from prison, said the current Egyptian government did not "tolerate hearing from the Muslim Brotherhood or any other critical voices."

"The prisons are overflowing with anyone who opposes or challenges the government," Greste wrote.

At a protest outside the Egyptian embassy in London on Wednesday, British journalist Sue Turton described Greste as a "measured and balanced journalist."

If found guilty in Cairo, the journalists could face seven years in prison.