Emirates ordered dozens of planes from the European giant while the US-based Boeing continued to suffer. Boeing has had a severe dip in reputation after two major deadly crashes involvings its 737 MAX. 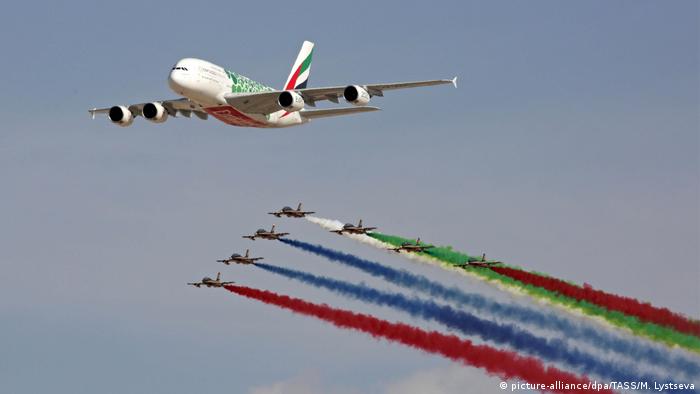 European aerospace giant Airbus said on Monday that it had inked deals with $30 billion (€27 billion) on the second day of the Dubai Airshow, with Emirates and local low-cost airline Air Arabia ordering dozens of A350s and A320s.

"Today, we are pleased to sign a firm order for 50 A350 XWBs," said Ahmed bin Saeed Al Maktoum, Emirates CEO.

The new aircraft "will give us added operational flexibility in terms of capacity, range and deployment. In effect, we are strengthening our business model to provide efficient and comfortable air transport services to, and through, our Dubai hub," he added.

Airbus Chief Executive Guillaume Faury said he was "very proud that Airbus 350 has been selected by Emirates."

Emirates‘ fleet already includes many superjumbo A380s, however, Airbus had already announced in February that it would halt production of its largest jet due to declining demand.

Airbus‘ main competitor, US-based Boeing, faired far worse, selling only about $1.2 billion worth of its troubled 737 MAX. The deal signed on Moonday with Turkish carrier SunExpress was the "first firm order" for the plane since it was grounded in March.

Boeing's reputation has suffered significantly after two major 737 MAX crashes occured in October 2018 and March 2019, killing a total of 346 crew members and passengers. Despite investigations into the first crash in Indonesia revealing that the crash was tied to a design flaw in the plane's control system, Boeing did not implement major changes or suggest the planes be grounded until after the second fatal incident in Ethiopia the following March.

At the Dubai Airshow, Boeing said it was still working with international regulators to ensure the aircrafts's safe return to the skies.

In more bad news for Boeing in Dubai, Al Maktoum announced that Emirates was experiencing delays in the delivery of 150 Boeing 777-Xs, the firm's new long-haul plane.

Boeing has seen a sharp fall in deliveries as its best-selling MAX jets remain grounded following two fatal crashes. The US plane maker has not reported any new orders for the MAX planes for three months on the trot. (10.07.2019)