At least four people died when a plane believed to be undergoing a military trial flight crashed near Seville airport in Spain. Two people reportedly survived the crash, while several others remain unaccounted for. 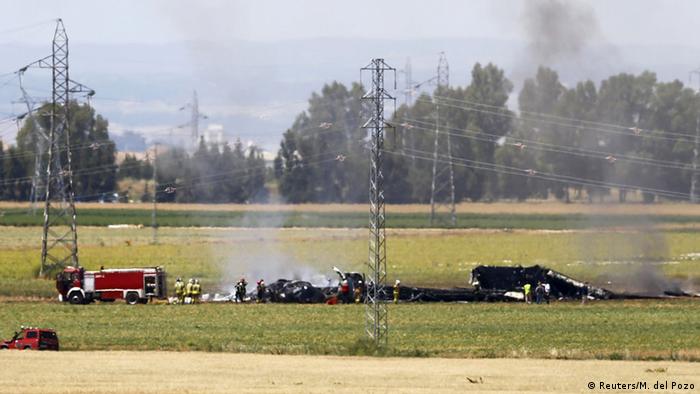 A government official said Saturday that four people on board the A400M Airbus which crashed on Saturday near Seville had died.

Andalusia's regional prefect Antonio Sanz, who heads the local administration, told reporters a burnt body had been located amongst the wreckage, bringing the death toll to four.

It remains unclear how many people were aboard the aircraft when it came down, with numbers ranging from six to 10.

The two injured crew members were transferred to a nearby hospital with serious injuries, and a further two remain unaccounted for, the unnamed spokesman added.

The El Mundo newspaper reported, citing a witness, that the plane crashed into an power line as the pilot attempted an emergency landing which then caused a power outage in a nearby suburb.

AENA, Spain's airport authority, confirmed the crash had caused a power outage at an industrial estate in the suburb of Carmona, but did not comment on reports the aircraft had hit an electricity pole.

Airbus, makers of the A400M and a government spokesperson declined to comment on the cause of the crash.

AENA confirmed the airport's closure, saying fire crews had attended a plane crash outside its perimeter fence. The airport was closed for just over 1.5 hours as crews attended the scene.

"The plane that crashed a mile (1.6 kilometers) north of Seville airport in an nonresidential area was not a commercial craft," a regional emergency services spokesman told AFP.

The Airbus A400M is assembled in Seville and had been undergoing flight trials at the time of the crash, the company said. The same type of aircraft had been delivered to the German military in December.

Airbus Defence and Space, the Airbus division responsible for military aircraft, said the crashed plane was destined for Turkey.

The company has sent a group of experts to the crash site to investigate.

If Saturday's crash is deemed an accident, it would be the aircraft's first since going into service in 2013.

In light of Saturday's crash, the German defence ministry announced it had grounded its Airbus A400M military transporter aircraft.

The decision echoes the announcement by Britain’s Air Force earlier on Saturday to ground its fleet of A400M aircraft carriers.

France, Malaysia and Turkey, each of which also operate the aircraft, have not made public plans to ground their fleets.

Germany currently owns one A400M which it took delivery of in 2014 after a delay of four years.

Berlin has placed an order for 53 Airbus A400M aircraft in total, but has plans to sell 13 to other countries.