Airbus in record deal with IndiGo | Business| Economy and finance news from a German perspective | DW | 17.08.2015

Airbus in record deal with IndiGo

India's largest domestic airline IndiGo has ordered 250 A320neo next-generation planes from Airbus, the plane maker has said. It is the European aviation giant's largest ever contract by number. 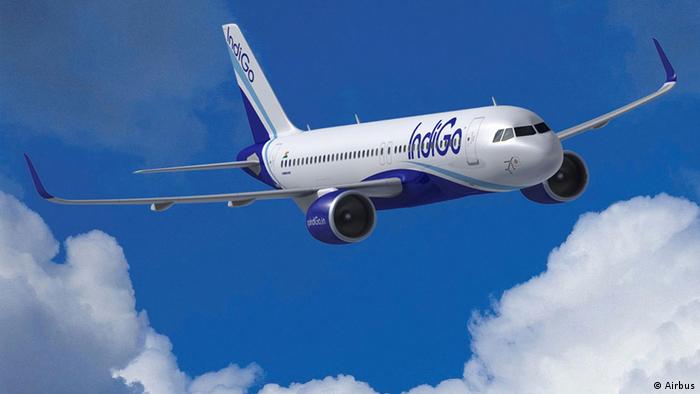 Airbus announced Monday that it had reached a deal with India's low-cost airline IndiGo to deliver 250 A320neo aircraft.

The Indian carrier already operates a fleet of A320s, having previously ordered 280 planes. With the latest announcement, the number of A320neo medium-haul aircraft IndiGo has so far ordered rises to 530.

The order is valued at around $26.5 billion (24 billion euros) at catalog prices.

The deal comes at a time when India's air passenger market is seeing rapid expansion, boosted by a growing economy and fast-expanding middle class.

Smaller passenger planes are increasingly in demand around Asia as budget carriers expand their reach to less prominent cities.

Airbus says the A320neo is also designed to be fuel-efficient, consuming 15 percent less fuel - a significant selling point for airlines in the cut-throat medium-haul sector.

With the latest deal, Airbus' order book for the A320neo has crossed to over 4,100 aircraft, reflecting its popularity with airlines.

European plane maker Airbus has reported a rise in earnings and revenues for the first half of the current year. With no major interruptions in global aviation expected, the group confirmed its 2015 guidance. (31.07.2015)

Gulf-based airlines Etihad, Qatar, and Emirates have been rapidly expanding their networks in Europe, from German feeder cities like Berlin and Cologne. But Europe's flag carriers and their US allies are fighting back. (28.05.2015)

Modi visits Airbus in Toulouse, with Germany up next for Indian PM

Gulf foreign ministers have expressed optimism about efforts to resolve a regional dispute that saw Saudi Arabia and its allies boycott Qatar. The row has rumbled on for more than three years.