Tel Aviv's protective "bubble" may have burst following recent bomb scares, but many locals remain relaxed about a possible attack from Hamas. Air-raid sirens and taking cover in bomb shelters is becoming normal. 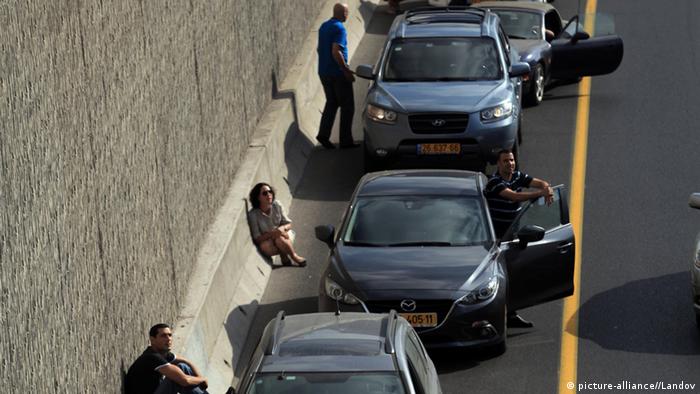 At least two rockets from Gaza were intercepted to the south of Tel Aviv by the Iron Dome air defense system overnight Tuesday (08.07.2014), causing sirens to sound and sending residents scurrying into bomb shelters.

The Mediterranean coastal city of nearly half a million people has long been considered a far frontier when it comes to attacks from Gaza, and many say residents there live in a bubble.

But last night as a spectacular air show was seen over the city, that perception was shattered. Air raid sirens also sounded around Jerusalem as three explosions were heard over the city.

Today, Prime Minister Benjamin Netanyahu instructed the Israel Defense Force to increase the intensity of Operation Protective Edge. "No target has immunity," he told troops. Netanyahu wants to prepare Israel for what will be a long campaign.

On the ground in Tel Aviv, the roads, the restaurants and the beaches are clearly much quieter.

Natan Grouper has owned a popular cafe, Meshulash Cafe, for 20 years. He told DW that business is only at about 20 percent of normal Wednesday, compared to a normal weekday. Just a handful of the cafe's tables were occupied.

"The city has been quieter than normal," Grouper said. "All the tourists have gone, too - I think people will cancel their trips to Israel or return home earlier." 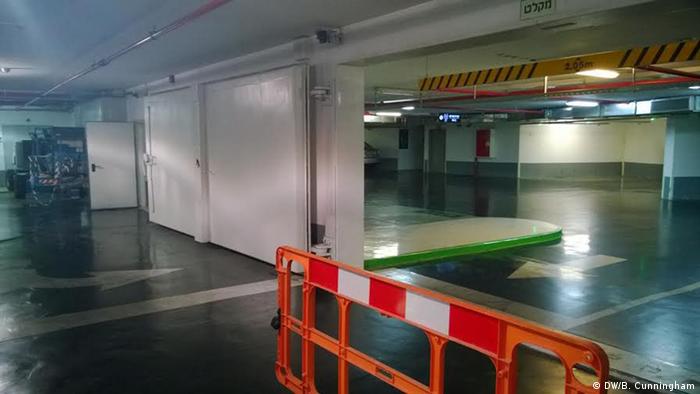 Gadi works nearby as a special projects manager at the Habima National Theater. He was helping with a farewell show for outgoing President Shimon Peres at the time of the first siren - 900 people were in the audience then, he said.

He told DW everyone remained calm, because the auditorium acts as a bomb shelter in times of crisis. He said unfortunately, he is used to such emergencies. But it's a worrying time for his children, he added.

Gadi doesn't think the current warfare is as bad as the first and second intifadas - but he thinks it must stop. He blamed deteriorating negotiations between Israel and Palestine. "There is so much hate from the two sides at the moment - the radicals from the two sides," he said.

Since Israelis and Palestinians are apparently unable to live together, "The only thing to do is to separate." Gadi said. "Maybe in years to come, we will learn to live as friends," he added.

Ilya, who is 24 years old, admitted he was scared during the attacks - but said he had full confidence in Israel's Iron Dome. When the sirens sounded, he said, people ran into the building - "no panicking, just order."

"We know we're protected, very well," Ilya said. He is not concerned about Hamas casualties, he added. "From what we know from our media, Hamas are the bad guys," he said.

As is occurring in Jerusalem, Tel Aviv is readying its public bomb shelters for intense activity over the coming days and weeks.

The Habima National Theater's underground parking garage in central Tel Aviv doubles as a bomb shelter. Its four below-ground levels provide shelter during an air attack, while an adjoining airtight room can be used in the case of more serious chemical attacks. 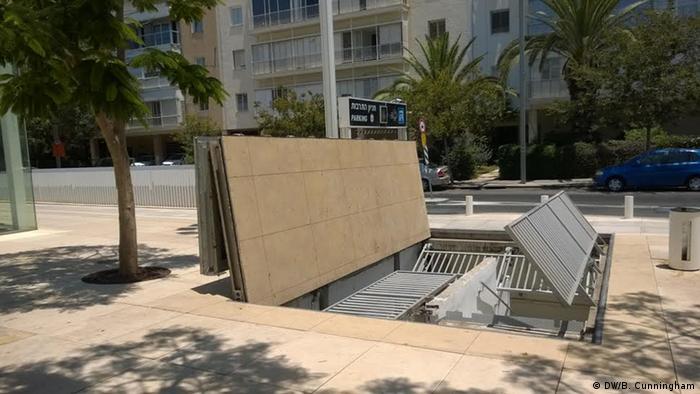 Trapdoors lead from the surface to the underground bomb shelter

Above ground, Gabai showed DW a concealed trap door in the expansive courtyard. Six such doors lead from the courtyard to the shelter - it can take six minutes for one to fully open, he said.

Gabai said he personally is not fearful during such attacks because "the missiles are pretty small," but that the idea of them bothers him. "Seeing attacks like these is not acceptable to me, but I don't think my life is in danger," he told DW.

Around the corner at Meshulash Cafe, Grouper doesn't think the rockets would do too much damage, as they are "very primitive." But he also predicted it would take more than just a few days for business to get back to normal.

Overnight, the Israeli military flew some 160 airstrikes against Hamas positions in Gaza. A ground offensive could follow, if rocket attacks on Israel don't stop, the army said, as more tanks lined up along the border. (09.07.2014)

Gazans brace for the worst

Israel has launched a major offensive against Hamas in the Gaza Strip in response to its attacks on Israeli cities. But ordinary Israelis and Gazans fear for their lives as the crisis escalates. (08.07.2014)