Turkey's parliament is looking ahead to a bitter vote on stripping MPs of immunity. The bill, which has led MPs to fisticuffs in the past, passed a preliminary vote with a large majority in the legislature late Tuesday. 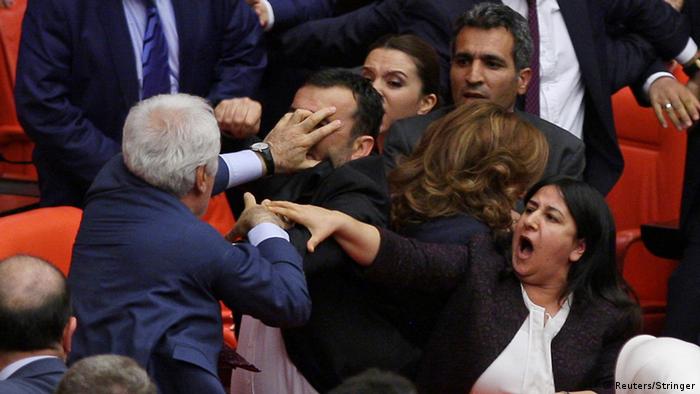 Turkey's legislature appears short of the two-thirds support necessary to approve a bill to strip deputies of parliamentary immunity. The Peoples' Democratic Party (HDP) and allied factions say President Recep Tayyip Erdogan has pushed the bill to force dozens of MPs out ahead of legislation to consolidate power in Turkey's executive branch.

"What this motion seeks to destroy is the HDP opposition in parliament," party co-leaders Selahattin Demirtas and Figen Yuksekdag wrote in a letter to European MPs.

A total of 348 deputies in the 550-seat Grand National Assembly supported the bill, with 155 against, parliamentary Vice President Ahmet Aydin announced after Tuesday's vote. The result opens the way for the second round of discussions and a final vote on Friday.

The Justice and Development Party (AKP) needs 367 votes - two-thirds of the legislature - to push the bill through. A three-fifths majority, 330 votes, would suffice to call a referendum. The AKP has 317 seats, but party deputies who risk prosecution could dissent.

Either way, the AKP needs outside support and will look to the far-right Nationalist Movement Party (MHP), which has 40 seats and deep disdain for the HDP. However, the MHP has fallen into disarray since November's election, and the AKP may also need support from the main opposition Republican People's Party.

Legislators exchanged blows over the bill more than once during committee discussions.

Currently, Turkish lawmakers have the right to full immunity from prosecution. A total of 130 deputies from all parties would find themselves vulnerable to charges should the bill pass.

The legislation could affect 50 of the 59 deputies for the HDP, which backs equality for Kurds and other minorities. HDP lawmakers face allegations of verbally supporting the outlawed Kurdistan Workers' Party (PKK).

Should Erdogan force so many opposition deputies from parliament, it would ease the way for the president to realize his dream of changing the constitution to create an executive system in Turkey.

"If successful, this coup would be a most crucial step for Erdogan to replace Turkey's parliamentary democracy, which he has twice declared 'de facto over,' with an absolutist presidential system," Demirtas and Yuksekdag wrote in their letter. Demirtas and Yuksekdag themselves could face trial on charges of making "terrorist propaganda" for the PKK and potentially receive jail time.

"Silencing democratically elected opposition MPs for their political statements is the obstruction of parliament and against democratic principles," a group of European Parliament members from several parties wrote in an open letter.

New Zealanders vote to legalize euthanasia but not cannabis 0m ago

Coronavirus: EU at risk of being overwhelmed, says Von der Leyen 2h ago

Senegal: At least 140 migrants die after boat sinks 8h ago