After longest delay in history, nuclear waste arrives at storage site | Germany| News and in-depth reporting from Berlin and beyond | DW | 09.11.2010

After nearly two days of blocking a nuclear waste storage site, thousands of protestors have been cleared from the area by police and the transport of 11 containers of nuclear waste has arrived at its destination. 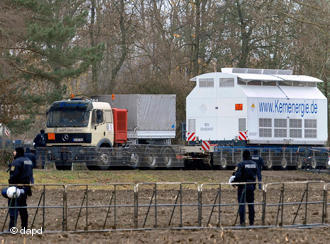 The last of the trucks arrived in storage around 9:50 a.m.

Police cleared thousands of anti-nuclear activists from roads leading to the nuclear storage facility in Gorleben, northern Germany on Tuesday morning, allowing for the final arrival of 123 tons of nuclear waste.

About 3,000 demonstrators staged a 44-hour sit-in in front of the storage site, including high-level politicians such as Green Party co-chair Claudia Roth.

Activists from the environmentalist organization Greenpeace used a truck disguised as a vehicle carrying beer to block the freight train station in nearby Dannenberg, where the waste containers were to be moved to trucks for the final 20 kilometers to the storage site.

Two Greenpeace activists delayed the transport by about 11 hours by encasing themselves in a cement block, making it so the police could not move them without injuring them.

Authorities managed to free the activists early Tuesday morning, and the first truck carrying the nuclear waste departed Dannenberg at around 8:30 a.m. The last of the trucks arrived at the storage facility at about 9:50 a.m. 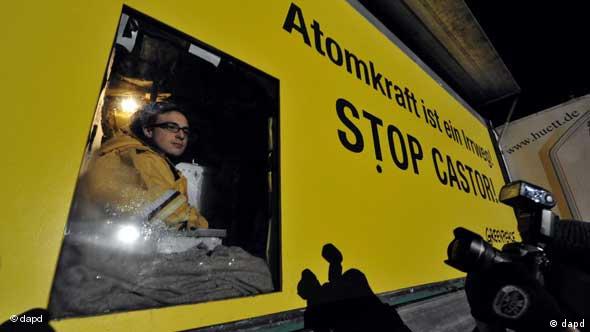 Large protests have taken place during past nuclear waste transport operations, but none have delayed the shipment of the waste as much as the most recent.

The waste originated from nuclear reactors in Germany and was sent to a plant in northern France for reprocessing.

The waste containers, called "Castors" (cask for storage and transport of radioactive material), left France by train on Friday afternoon, but were quickly stopped by the first blockade of activists on the train tracks.

The following days were a tedious stop-and-go game, as protestors blocked the train tracks and some of the 16,000 police officers mobilized to secure the transport removed them.

Leaders of the various "citizens' initiatives" against nuclear power claimed victory on Tuesday, despite the successful transport of the nuclear waste, and some vowed to continue protests. 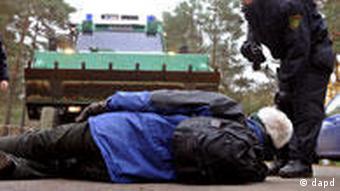 Protestors succeeded in delaying the transport on historic levels

"We've shown that we're a force to be reckoned with," said Kerstin Rudek, chairwoman of the Citizens' Initiative for Environmental Protection Luechow-Dannenberg.

Matthias Miersch, environment spokesman for the opposition Social Democrats in parliament, said the movement against the nuclear waste transport was a "very impressive demonstration."

"This was a very clear signal to the government that this atomic energy policy cannot go on," he told Phoenix public television. "Politicians have to understand that decisions are being made now that the people are absolutely unable to relate to."

Meanwhile Munich-based daily Sueddeutsche Zeitung reported on Tuesday that Germany had negotiated a deal "ready to be signed" to ship nuclear waste originating from an old atomic research facility in former East Germany to Russia.

The report said a total of 951 nuclear fuel elements from the East German research center Dresden-Rossendorf, which have been in temporary storage since 2005, would be shipped to the Mayak atomic complex in the southern Urals for reprocessing. The waste would stay in Russia for permanent storage. 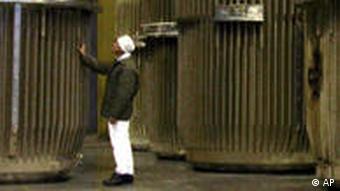 The report said the basis for the transport deal was a previous agreement between the United States and Russia, which regulates the transport of nuclear waste from reactors that were overseen by the Soviet Union. Germany's goal was reportedly to "reduce the amount of highly-enriched uranium as much as possible."

The deal received criticism from the Green Party, which has profited politically from a strong anti-nuclear sentiment in Germany.

"Cheap before safe, that's what this is about," Green party spokeswoman Sylvia Kotting-Uhl told the newspaper.

The massive demos along the route of the radioactive waste transport to Gorleben have benefitted from other hot spots like Stuttgart 21, a controversial infrastructure project. (08.11.2010)

Nuclear protest: A chronology of events