Iconic French fashion designer Jean-Paul Gaultier has announced that his haute couture show on January 22 in Paris will be his last. But the irreverent fashionista promises a new high design "concept" is in the wings.

The news came as a surprise: The revered French designer Jean Paul Gaultier bid adieu to his fashion collection shows on social media with a quirky video in which he makes the announcement on his phone. In the conversation with his fans, he sends out an invite to "celebrate my 50 years in fashion" on January 22 at the Théâtre du Châtelet in Paris.

But though the curtain will come down on the French fashion designer's catwalk shows, a "new concept" was in the works, he promised.

Born in an outer Paris suburb in 1952, the untrained designer began his career when he landed a job as a drawer and assistant for Pierre Cardin in 1970. It wouldn't take long for his outré creations to transform the French fashion landscape. 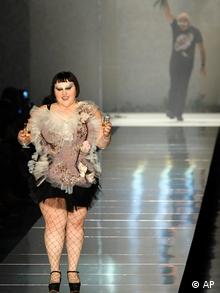 Gaultier's first individual collection appeared in 1976, while from 1997 on he also dedicated himself to haute couture. Meanwhile, the designer released dance music singles and hosted the TV variety program Eurotrash on Channel 4 — usually in a skirt — from the 1990s to 2007.

The Parisian trendsetter became known for his use of catwalk models that do not correspond to orthodox standards of beauty, or gender identity — including the short, shapely front singer of the band Gossip, Beth Ditto.

Designing dresses and skirts to be worn by both women and men, Gaultier was the first fashion designer to work with androgynous models like Tanel Bedrossiantz. The fashion designer also brought the transgender Eurovision Song Contest winner from 2014, Conchita Wurst, onto the catwalk.

The human body is the basis for his work that has also never been shy of nudity and eroticism. As he stated in a video posted to Twitter that documents an "open casting" that marks his 50 years in the fashion business: "There is not one kind of beauty, there are many kinds."

The blue-striped sailor look is a Gaultier trademark that was tailored for everyday use, and paired well with his mass market perfume range. You can't say that about most of his daring creations, however, including the famous conical bra corset he crafted in the 1980s for Madonna.

In 2014, the eccentric fashion designer already withdrew from the prêt-à-porter ready-to-wear market. But with Gaultier assuring that his creative career is far from over, the world will be watching after he takes a final bow in Paris.

Jean-Paul Gaultier’s opulent catwalk show is one of the highlights of Paris Fashion Week. For the past few years he has concentrated largely on haute couture where he can let his imagination run wild. (28.01.2017)

Fashion icon Jean Paul Gaultier takes his talents to the stage in Berlin by designing costumes for "The One." The new revue show is the most expensive and highest-selling to date at the Friedrichstadt-Palast. (05.10.2016)

Jean Paul Gaultier is an "Enfant terrible" in the fashion world. His designs are extravagant and extreme. He loves using unconventional models in his shows, such as singer Beth Ditto. (01.02.2016)

It's the end of an era: Star designer Jean Paul Gaultier is taking his final bow as a catwalk designer after a 50-year career. A look back at the edgy style that turned him into a fashion legend. (21.01.2020)

The best of Paris Fashion Week

Paris Fashion Week for Fall 2019 wrapped up on Tuesday, full of suits and sculptured silhouettes. Here are some of the best looks on show in the French capital. (04.03.2019)

The Grand Couturier of Paris

Eric Charles-Donatien of France is one of the few craftsmen who've mastered the art of plumasserie, or featherwork, to perfection. His feathers lend the creations of haute couture fashion designers a particular touch.

High fashion provocateur Jean Paul Gaultier had his last show in Paris in 2020, but as he enters his eighth decade his inimitable style lives on.