Burkina Faso's military must return the country to civilian rule within the next two weeks or face sanctions, the African Union has said. The interim president promised a "consensus" leader ahead of the AU demand. 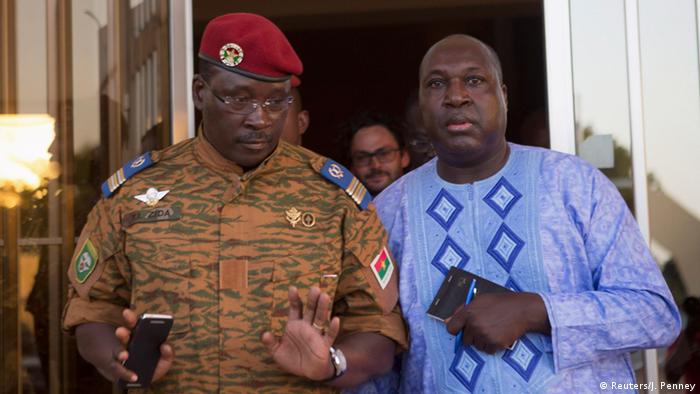 The African Union (AU) gave the army two weeks to transfer power to the civilian authorities and threatened to target the country's economy if it didn't comply.

"The African Union is convinced the change has been aginst democracy," the head of the AU's Peace and Security Council, Simeon Oyono Esono, said on Monday in Addis Ababa.

However, noting that "popular pressure" had forced long-time leader Blaise Compaore to step down, Esono said that the AU had "determined a period of two weeks, and after that period we are going to apply sanctions."

The threat of sanctions followed words of condemnation from the United Nations, the United States and the European Union over the weekend in reaction to the military's taking control of the country.

If the army refuses to hand power back, "the consequences are pretty clear," said UN envoy for West Africa Mohamed Ibn Chambas. "We want to avoid having to impose sanctions on Burkina Faso."

Ahead of the AU's announcement on Monday, Burkina Faso's interim president, Lieutenant Colonel Isaac Zida, had vowed that the army would be quick to give up power and transfer the rule to a transitional government. Zida said that his role was to ensure a "smooth democratic transition," during a meeting with diplomats in the capital city Ouagadougou.

"We are not here to usurp power and to sit in place and run the country but to help the country come out of this situation," Zida said. He gave no timeframe for the transition, but said he wanted a new government in place within the "shortest possible" period of time.

The Monday talks built on meetings between Zida and the ambassadors of former colonial power France, the United States and the European Union Sunday evening.

Calm returns to the capital

After naming Zida as interim head of state two days ago, the military said that "power does not interest us." Still, its takeover sparked angry protests over the weekend and was criticized by opposition, the African Union and Western powers demanding civilian rule.

On Sunday, troops dispersed thousands of demonstrators gathered at a rally against the military takeover in the capital city, using armored vehicles. One person was killed Ouagadougou appeared calmer on Monday, with banks reopening and traffic returning to the streets. An overnight curfew remained in place.

According to the Burkina Faso constitution, the head of the National Assembly is to take office if the president resigns, with a mandate to organize elections within 90 days.

However, this official has reportedly fled the country, along with now ex-President Blaise Compaore and other senior members of his regime.

One of the representatives of the opposition party UNIR/MS, Benewende Stanislas Sankara, expressed concern at the army's role in overseeing governance.

"Nobody can place their confidence in the army. But the military authorities in power now appear to be acting in good faith," he told Reuters news agency.

Troops have dispersed thousands of demonstrators in Burkina Faso's capital, according to witness reports. Just days after a coup, soldiers have put up barricades and taken control of state TV headquarters. (02.11.2014)