Military takeover in Burkina Faso criticized at home and abroad

Protesters have again gathered on the streets of Burkina Faso to demand that the army restore civilian rule. Several members of the international community have also criticized the military takeover. 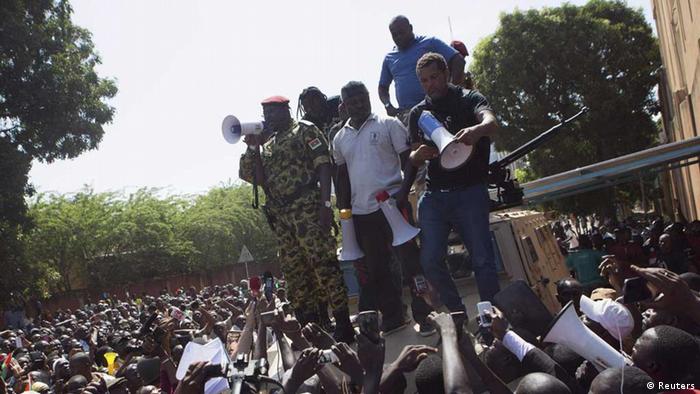 Sunday's demonstration in the capital, Ougadougou, appeared to be much smaller than the ones last week that led President Blaise Compaore to step down and flee the country on Friday.

News agencies estimated the number of protesters who turned out to the capital's main square on Sunday at between a few hundred and a few thousand.

On Saturday, opposition leaders had called for the demonstration against what they described as a military coup, in which Lieutenant-Colonel Isaac Zida has emerged as the country's new leader.

Opposition figures who turned out to the demonstration briefly addressed the crowd, denouncing the power grab.

You must "remain vigilant to preserve the people's victory," the AFP news agency quoted Jean-Hubert Bazie, leader of the Convergence of Hope party, as saying. He then called on the crowd to disperse peacefully.

The military takeover has also been condemned by some members of the international community.

The US State Department on Saturday called on the country's army to restore civilian rule immediately.

"We urge civilian leadership to be guided by the spirit of the constitution of Burkina Faso and to move immediately towards free and fair presidential elections," a statement issued by State Department spokesperson Jen Psaki said.

The head of the United Nations Office for West Africa, Mohammed Ibn Chambas, said he was hopeful that civilian rule would be restored swiftly.

"If not, the consequences are pretty clear," Chambas said. "We want to avoid having to impose sanctions on Burkina Faso."

Germany has also condemned the military takeover. A statement from the foreign office in Berlin on Sunday called on the country's military to hand back powers to civilian authorities in accordance with the country's constitution.

Zida emerged as the new leader of Burkina Faso following a meeting of senior military officers on Saturday, after a rival general withdrew his claim to power.

This came a day after President Compaore resigned in the face of days of mass protests against his rule, before fleeing to neighboring Ivory Coast.

The protests began after the news emerged that Compaore was seeking to get Burkina Faso's constitution changed to allow him to run for a fifth term in office.

The resignation of President Blaise Compaore after 27 years in office has set two rival army factions scrambling for control of the West African nation. Lieutenant Colonel Isaac Zida has announced he is in charge. (01.11.2014)

The head of Burkina Faso's armed forces has taken power after mass demonstrations forced President Blaise Compaore to resign. There have been days of violent protests against the leader's 27-year rule. (31.10.2014)

Chambas: 'Do everything to help Burkina Faso'

Protests resumed in Ouagadougou, capital of Burkina Faso, on Friday with demonstrators demanding President Blaise Compaore step down. The UN special envoy spoke about the situation in an exclusive DW interview. (31.10.2014)