Troops have dispersed thousands of demonstrators in Burkina Faso's capital, according to witness reports. Just days after a coup, soldiers have put up barricades and taken control of state TV headquarters. 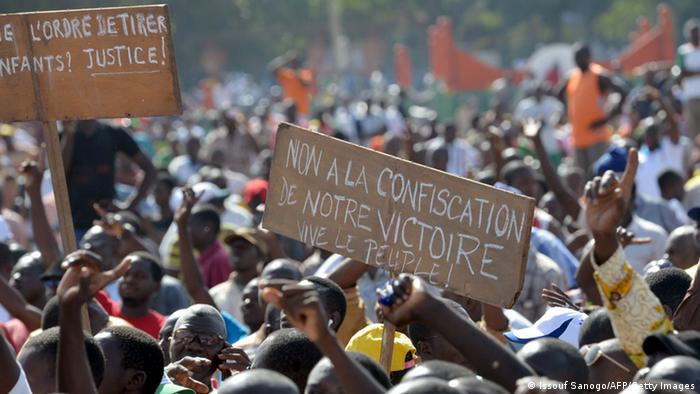 Two days since Burkina Faso's military coup, troops have seized control of a main square in the capital Ouagadougou and dispersed thousands of protesters.

AFP correspondents at the scene reported that military guards had stood in front of the main building of state radio and TV station RTB and fired gunshots into the air to disperse crowds of demonstrators before taking control of the building on Sunday (02.11.2014).

The country's new military leader, Lt. Col. Isaac Yacouba Zida, who was appointed transitional leader on Saturday, came under increased pressure on Sunday to hand over power to a civilian government as people gathered in the capital to protest.

Stanislas Benewinde Sankara, leader of one of the opposition parties, called for the dissolution of the interim Zida government on Sunday: "The army cannot lead us - they have disqualified themselves … this is the result of a popular insurrection," Associated Press reported.

The African Union along with the United States has voiced concern over the military coup. African Union Chairperson Nkosazana Dlamini-Zuma called for a "civilian-led transition that would culminate, as soon as possible, in the holding of free, fair and transparent elections."

A statement from her office read: "She stresses the duty and obligation of the defense and security forces to place themselves at the disposal of the civilian authorities who should lead the transition and to act in a republican spirit."

US State Department spokeswoman Jen Psaki said, "We call on the military to immediately transfer power to civilian authorities. We urge civilian leadership to be guided by the spirit of the constitution of Burkina Faso and to move immediately towards free and fair presidential elections."

Protesters have again gathered on the streets of Burkina Faso to demand that the army restore civilian rule. Several members of the international community have also criticized the military takeover. (02.11.2014)

Maas slams 'unacceptable' attack by Erdogan on Macron 4h ago