The African Union has called for international war crimes prosecutors to drop proceedings against the Kenyan president and his deputy. The bloc's chairman claims African leaders are being targeted on a racial basis. 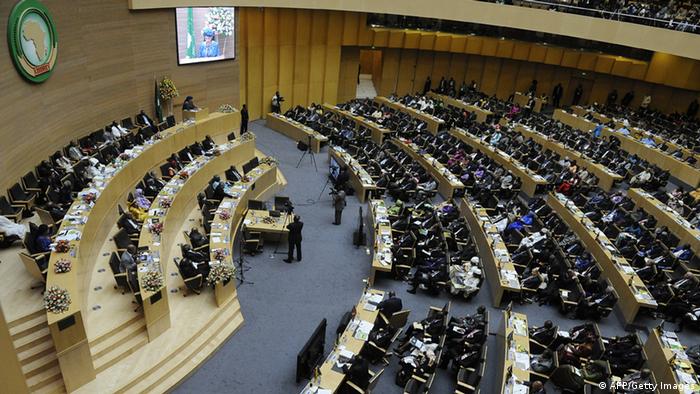 The comments from Desalegn, chairman of the African Union (AU) came as a summit in the Ethiopian capital Addis Ababa debated crimes against humanity proceedings against Kenyan President Uhuru Kenyatta and his deputy William Ruto.

"African leaders have come to a consensus that the (ICC) process that has been conducted in Africa has a flaw," chair and Ethiopian Prime Minister Hailemariam Desalegn told reporters. "The intention was to avoid any kind of impunity... but now the process has degenerated to some kind of racial hunt."

Desalegn complained that "99 percent" of those charged by the ICC were African. "It shows that something is biased in the ICC system, and we challenge it," he said.

African leaders are set to pass a resolution urging the ICC to refer crimes against humanity trials against four Kenyan's, including the country's president, back to Kenya. Human rights groups have opposed the move. (27.05.2013)

The bloc called on the ICC to abandon the Kenya cases, in light of judicial and constitutional reforms within the country, and agreed to put forward its complaint to the UN.

"We have taken a clear position," said Desalegn at the close of the two-day summit. "The AU has received the mandate to carry our discontent forward to the United Nations."

Along with Kenyatta and Ruto, two other people are accused by the ICC of provoking and organizing post-election violence in late 2007. Amid the turmoil, more than 1,000 people were killed in ethnic attacks. Their trials are expected to begin in The Hague this year.

"Now that Kenya has reformed its judiciary things should be left in the hands of the country," said AU Commission chairwoman Nkosazana Dlamini-Zuma.

Members of the 54-nation-strong AU also agreed to set up an emergency military force to respond to crises and conflicts.

"We have established an African Standby Force. It is important for Africa to be able to respond," said Dlamini-Zuma. Exact details about the force are to be negotiated in future talks between African states.