Thousands of African migrants in Israel who demand recognition as refugees have converged on parliament in Jerusalem. Israel's conservative government says a recently built fence will stop "illegal infiltrations." 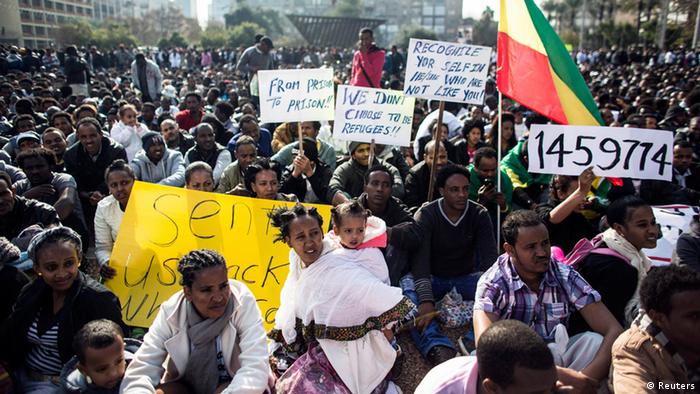 More than 10,000 Africans asylum seekers, mostly from Eritrea and Sudan, staged a fourth day of protest late on Wednesday in Jerusalem, demanding in a letter "direct and open dialog" with the government.

Parliament speaker Yuli Edelstein refused to allow four migrants, who he described as "infiltrator representatives" into the parliamentary building. A statement from his office said a descent into violence was feared.

The mass protests began in Tel Aviv on Sunday over Israel's policy toward some 60,000 migrants it regards as "illegal" job-seekers.

Last year, Israel built a fence along its once porous border with Egypt. In December, parliament passed a law allowing "illegal migrants" to be detained without trial and opened a detention facility in the Negev desert.

Prize-winning Israeli author David Grossman told protestors on Wednesday that he felt "embarrassed and ashamed" by the government's reaction.

Protest organizer Habton Mahari from Eritrea told Israeli Chanel 1 television Wednesday that the government must "revoke that racist law" and release migrants arrested "on the streets."

Another migrant told Reuters that he had fled Eritrea six years ago, fearing that his criticism of its rulers had put him in danger.

The website of the Haaretz newspaper said asylum requests had been lodged by 1,800 applicants. Of the 250 examined, none had been approved.

Many of the migrants live in poorer areas of Tel Aviv, Israel's commercial center, and work typically as cleaners and dish-washers.