African nations meeting in Paris have agreed to cooperate in the fight against Boko Haram. Meanwhile, Nigerian President Goodluck Jonathan has vowed to find the more than 200 girls kidnapped by the Islamist militants. 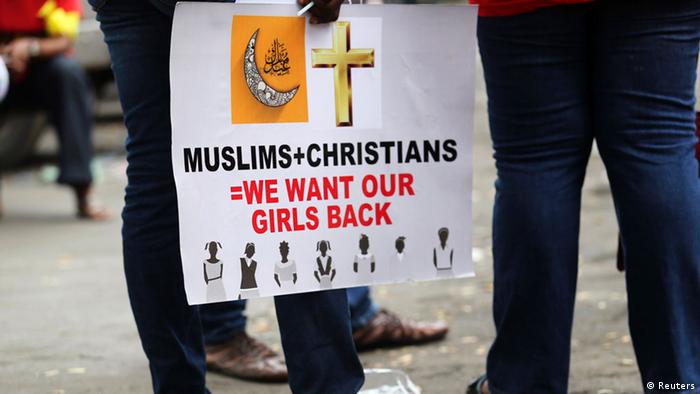 During a summit in Paris on Saturday, Nigeria's neighbors declared war on Boko Haram, vowing to join forces with Abuja to defeat the Islamist militant group.

"We are here to declare war on Boko Haram," Biya told journalists after the summit had concluded.

In the latest incident of violence, suspected Boko Haram militants attacked a camp of Chinese roadworkers in northern Cameroon on Friday. The regional governor said that 10 people had been kidnapped by the militants. A local police chief said that one Chinese worker had been killed in the raid.

Meanwhile, Nigerian President Goodluck Jonathan said that the Islamist militant group had developed into a threat to international security. Neighboring African nations had long viewed Boko Haram as an internal problem in Nigeria.

"Boko Haram is no longer a local terrorist group, it is operating clearly as an al Qaeda operation, it is an al Qaeda of West Africa," Jonathan told a news conference in Paris after a meeting with regional leaders.

"We have shown our commitment for a regional approach," Jonathan said. "Without West African countries coming together we will not be able to crush these terrorists."

Jonathan went on to say that his government was determined to find the more than 200 schoolgirls who were kidnapped by Boko Haram more than a month ago.

"We are totally committed to find the girls wherever they are," the Nigerian president said.

He had been scheduled to visit the girls' hometown of Chibok on Friday. But the visit was called off, reportedly due to security concerns. Jonathan defended his decision to cancel the trip.

"What is of interest now is to locate the girls," he said. "The girls are not in Chibok,"

"I will visit Chibok," the president promised, without providing a date.

Jonathan has come under intense criticism, both at home and abroad, for allegedly reacting slowly and inadequately to the kidnappings.

French President Francois Hollande had called Saturday's summit in the aftermath of the kidnappings. The leaders of Benin, Cameroon, Chad, France, Niger, and Nigeria attended the meeting. British Foreign Minister William Hague and US officials were also present.

Although diplomats have ruled out an EU or US military operation, Western nations are providing advice and support.

"A comprehensive plan needs to be put in place from exchanging information to coordinating action and controlling borders," President Hollande said.

Meanwhile, Hague has offered to embed British advisors with the Nigerian military.

"Nigerian security forces have not been well structured for this kind of thing and that has been shown by the problem getting worse," Hague told reporters in Paris on Saturday.

"Nigeria has the main responsibility and must be the leading nation in tackling this and that includes to mount an effective security response and improve development," he said.

The Twitter campaign #BringBackOurGirls has galvanized international support to find the abducted school children. So far, France, Britain, Israel, Spain and the US have pledged advisors, surveillance aircraft, and intelligence to help Nigeria in its search.