African leaders have come together in Rwanda this week for their 27th summit. Proposals include a new Africa-wide passport but most Africans are skeptical. 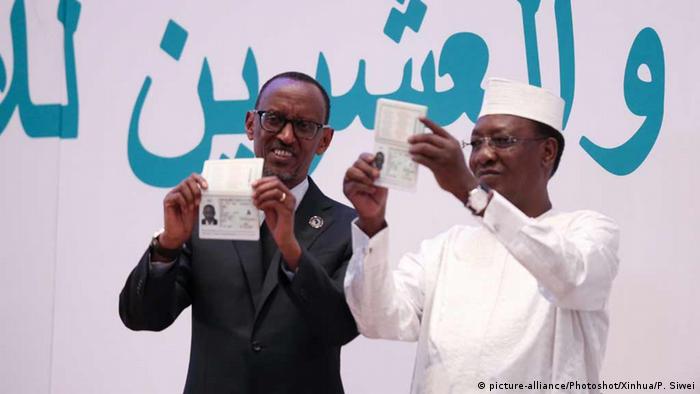 At their summit in Kigali, heads of state from the African Union (AU) are tackling many issues including the free movement of African citizens and goods through the union's 54 member states.

The passport launching ceremony was presided over by the outgoing president of the AU Commission, Nkosazana Dlamini-Zuma, who called the move a "steady step toward the objective of creating a strong, prosperous and integrated Africa, driven by its own citizens and capable of taking its rightful place on the world stage."

The president of Chad, Idriss Deby Itno, chairperson of the AU, and Rwandan President Paul Kagame, the host of the AU Summit, received the first passports from the AU chairperson.

"I feel deeply and proudly a true son of Africa after receiving this passport," said Deby.

The AU is seeking to stress the importance of fast-tracking integration on the continent as a means of achieving socio-economic growth.

The passports which were issued to the leaders of Chad and Rwanda are only available for AU officials and heads of state. This will eventually be widened to include foreign ministers. It was not revealed when and or if ordinary Africans would receive an Africa-wide passport.

The idea of the free movement of trade and people has long been a goal of many African politicians. However, outside of the Economic Community of West African States (ECOWAS), where 15 West African countries offer a passport for intra-regional travel of member states' citizens for up to 90 days, little has been achieved in establishing the free movement of either people in goods over borders on the African continent.

Dlamini-Zuma urged heads of states in Africa to create their own protocols for introducing Africa-wide passport to their citizens "as and when they are ready."

Most Africans are skeptical of such a continent-wide passport. Although the European Union allows for the free movement of goods and citizens, passports continue to be issued by national authorities.

"I do not think the visa brings anything good rather it might bring some hidden complications which we are going to see in the future," said Asrat Tasse, a politician living in Addis Ababa.

The East African Community comprised of Uganda, Tanzania, Kenya, Rwanda and Burundi has long spoken of implementing the free movement of goods across the region but the initiative has yet to be fully realized.

"We will have to wait and see when it’s actually rolled out to citizens like myself of African countries and not to our heads of state or to people working for the African Union," said Ottilia Maunganidze, a researcher the Institute for Security Studies (ISS).

Rwandan President Paul Kagame stated that the passport and the summit was a chance for the continent to achieve new goals.

"Africa is being raised actively by us the people of this continent, our job is simply to raise Africa even higher," Kagame remarked.

Moroccan king Mohammed VI has announced that the country was willing to reenter the AU, despite decades-old diplomatic spat that caused the kingdom to leave. Morocco is the only African country outside the bloc. (18.07.2016)